Star Wars: Episode VII- The Force Awakens, chose to use real locations and miniature models for filming rather than green screens and CG, in order to make the film as visually similar to the original Star Wars trilogy as possible.

While filming, Harrison Ford broke his ankle on the door of the Millennium Falcon. Director J.J. Abrams also hurt his back trying to help Ford out from under the door.

Oscar Isaac found out he had been cast just hours before the first table read. He was instructed to wait in a London hotel room for a call, which would tell him whether to go downstairs and get in a car waiting to take him to the table read, or book a flight back to the United States.

Harrison Ford is top billing for Star Wars: Episode VII, marking the first time a non-Jedi has been credited first. He was also [by far] the highest paid. 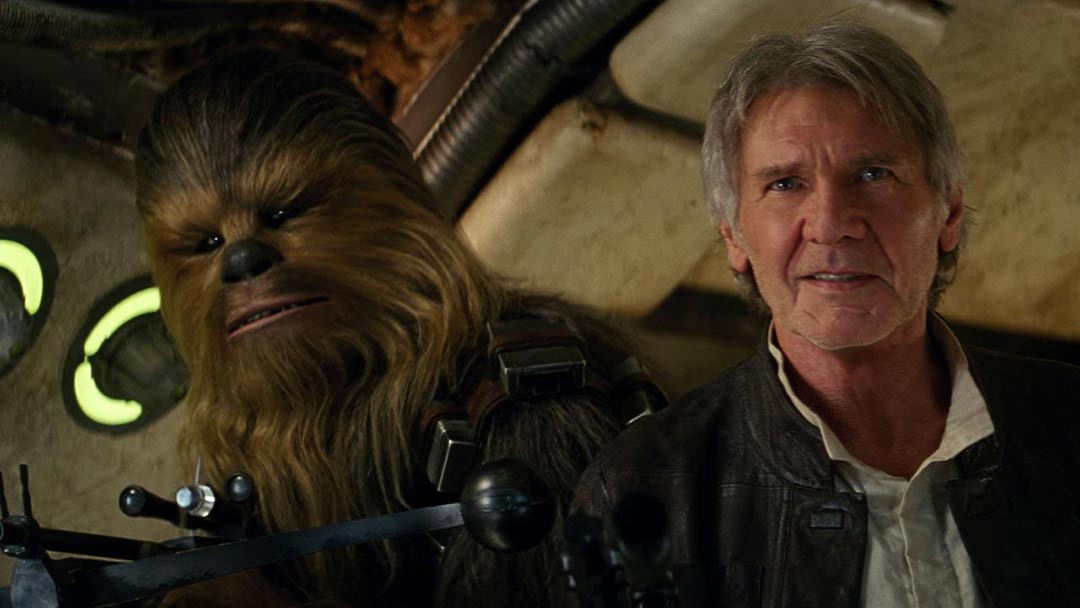 Star Wars is back! It feels as though the wait for The Force Awakens has been forever, but that's possibly because the excitement surrounding this film builds and builds, making us even more anxious to see it.

Following on from the events of The Return of the Jedi, we pick up the action several years later with Rey, a young scavenger who locates a droid in the dessert. The rest unfolds from there and I'm not going to elaborate on the plot any further, because this is a movie you really need to watch.

Forget episodes I, II, and III, Star Wars: Episode VII is a proper Star Wars film, a real labor of love from director J.J. Abrams and a return to form. It's almost an homage to the original trilogy and of course, it features Harrison Ford, Carrie Fisher and Mark Hamill in their original roles. Chewwie, R2-D2 and C3PO also return to the franchise and it feels so right, and so good that you'll be hooked from the start.

It's not just the original cast that make this movie so great, it's also the seamless blending of the old and new. Rey, played by Daisy Ridley, is one of the central characters; a strong, independent female character that is every bit as capable as her male counterparts.Then there's John Boyega as Finn, the stormtrooper with a heart, and Oscar Isaac as the very swoonworthy Poe Dameron. The newest droid on the block is BB-8, and I defy anyone not to fall in love with him/her.

The trailer itself is just mind-blowingly brilliant. It doesn't give anything away, other than a glimpse at the villain, Kylo Ren, but it does exactly what all good trailers should do; it makes us want to watch the film. If we were excited before, it's nothing compared to the way this trailer builds our intrigue and compels us to watch. The Force Awakens is the first in the final three Star Wars installments, which will be interspersed with many stand alone films. How it will all unfold is anyone's guess, but if the rest of the movies in the franchise are even half as good as this one, we're in for a treat.