Trailer for Sausage Party, the first R-rated CG animated movie, is about one sausage leading a group of supermarket products on a quest to discover the truth about their existence and what really happens when they become chosen to leave the grocery store.

One part of the official synopsis for Sausage Party that just amuses us is the fact that it describes the film as the first R-rated (CG) animation ever made. I'm sure Rogen and company wish they could claim that they are the first R-rated animation ever, but one can't forget about the South Park movie. And, while they don't want to consider that film as CG since almost nothing looks computer generated, that 1999 release was in fact computer generated. Trey Parker and Matt Stone used Alias|Wavefront, a software that not only does CG animation but other advanced 3D effects.The animation was purposely rendered -- by computer, mind you -- to only look like it was 2D paper stop-motion. So it would seem that Sony is making some inaccurate claims in their marketing materials.

To top it off, the synopsis already celebrates that Sausage Party is Rated R, though the MPAA has yet to rate the film, as confirmed by the final second of this trailer where it says, "This film is not yet rated." Yes, of course, it will land the MPAA rating [of approval], but somewhat jumping the gun all the same. 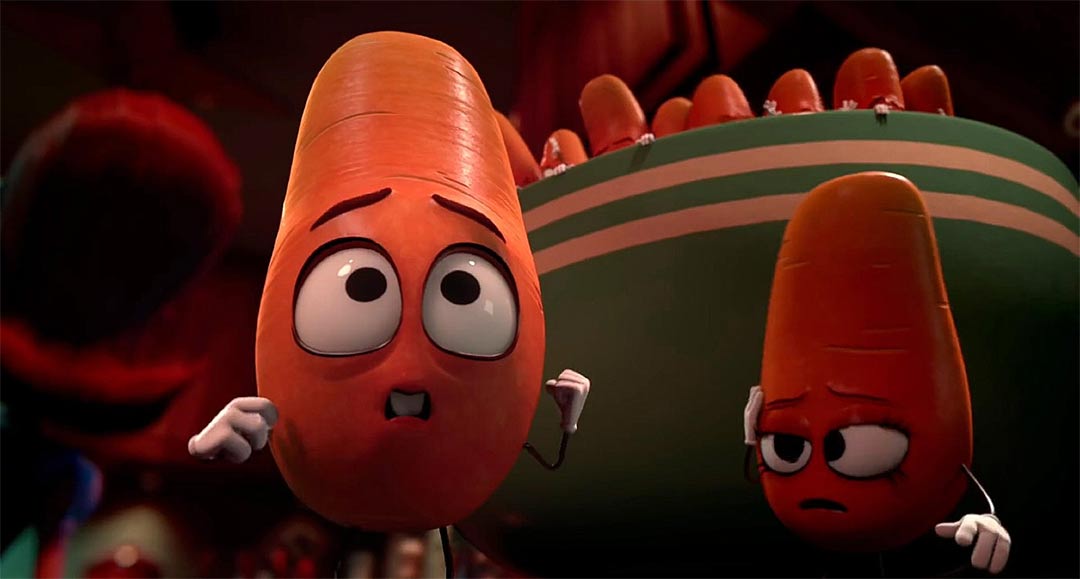 The Sausage Party trailer is very similar to the red band trailer in terms of visuals. I mean, they still show "children" being eaten, and a potato getting skinned; each of which could be considered traumatizing for non-R audiences.

Where the green band has to get creative is with the dialogue, and this is where the trailer succeeds. We know that the film is dirty, and there are enough bits of dialogue that will go over kids heads that adults will instead understand in the most adult way. Some prime examples are the innuendos between the hot dog (voiced by Seth Rogen) and the bun (Kristen Wiig). The visual is obvious, come on, but the whole "just the tip" joke in the latter half is classic. Even more impressive, Sony got away with doing imagery of blood in this latest trailer for Sausage Party and gives a quick blip of a character obviously smoking something that is being legally questioned as we speak. Doesn't smoking automatically make a trailer a red band?

Not complaining at all, as the ability to remind audiences that your animation is a hard-R through a PG trailer is indeed a feat worth bragging about.