Sausage Party is about one sausage leading a group of supermarket products on a quest to discover the truth about their existence and what really happens when they become chosen to leave the grocery store.

Just in case you were in doubt, yes, a red band trailer for Sausage Party means this film is definitely rated-R. Or weren't you counting the F-bombs? While the R-rated animation is rare, it's not unheard of. Sausage Party is the first R-rated animation since South Park: Bigger, Longer & Uncut; though we are doubting musical numbers this time around.

You've always heard that computer-generated animations take forever to make. The same rule of thumb holds true here, as this animation began development all the way back in 2010. To add a bit more time from conception to release, Sony Pictures pushed back the film's release date from the beginning of summer, June 3rd, to the end of summer, August 12th, 2016. While an August push typically means a film doesn't have what it takes to survive competing summer tentpoles, we can only assume that the whole R-rated animation genre had something to do with it. It's odd. It's weird. Both of which August welcomes with open arms. 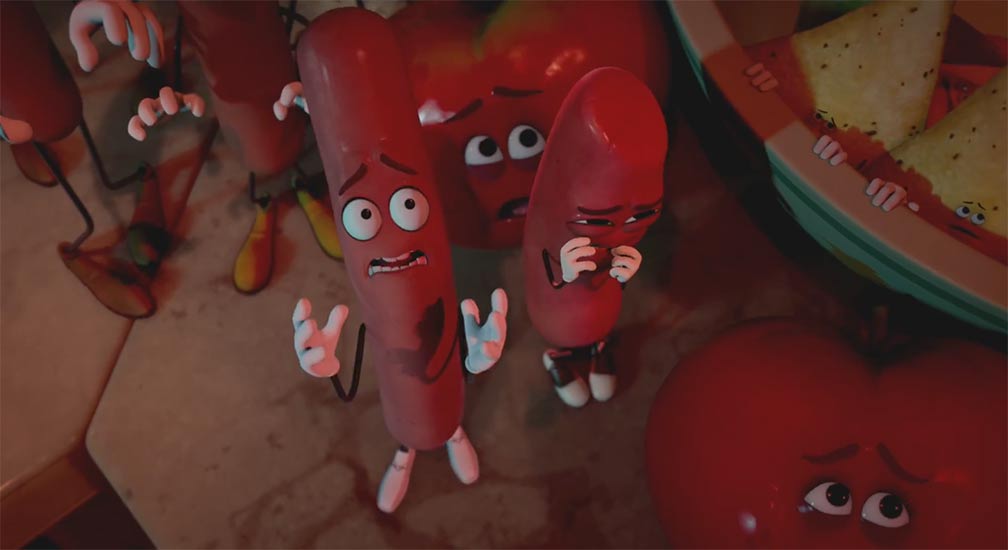 While the Sausage Party red band trailer has no problem cursing like a sailor, this preview left out all other possible R-rated mischief. Barely a sexual innuendo, of which I assumed there would be a ton. This film is called Sausage Party after all. So, a lot of opportunity was missed considering this trailer could have gone far more raunchy.

When it comes to what there is to like, the entire concept of food [and vegetables] discovering that they exist only to be eaten is pretty cool, and the hilarity of all the horrors that would come with that discovery. Absolutely love the Indian sequence and the refrigerator scene featuring foods with freezer burn. Very creative. But damn, how are there only F-bombs and barely anything more that fits the definition of red band? Come on-Just one extra-dirty adult reference! One!

Sure, seeing characters killed off, including baby carrots, by an unknowing human can be considered horrific and gory, I still feel Sony could have given us more. Well, for now we'll have to be happy with the F word. Hopefully in the next trailer for Sausage Party -- possibly another red band? -- they show off some more er, creative dialogue.