Captain America: Civil War picks up where Avengers: Age of Ultron left off, as Steve Rogers leads the new team of Avengers in their continued efforts to safeguard humanity. After another international incident involving the Avengers results in collateral damage, political pressure mounts to install a system of accountability and a governing body to determine when to enlist the services of the team. The new status quo fractures the Avengers while they try to protect the world from a new and nefarious villain.

Co-Director Joe Russo says that the best shot of Captain America: Civil War, is when Captain America tries to stop a helicopter taking off using just his bare hands. To get the shot, they had Chris Evans straining against a crane while grabbing the helicopter. The Russo brothers likes the resulting shot so much, they used it in the trailers.

As Black Panther, Chadwick Boseman will get his own solo movie in 2018. Because of this, Marvel were keen to give him a smaller role in Civil War, and not to reveal T'Challa's Black Panther suit. However, when it looked like the studio would not be able to use Spider-Man, they beefed up T'Challa's role significantly. By the time they were granted the rights to Spider-Man, most of Black Panther's scenes were already shot so they decided to leave it the way it was, hence Spider-Man's smaller role.

Filmmakers describe Bucky Barnes as a divided character in Civil War, Saying that he's neither Bucky nor The Winter Soldier anymore. They point out that having been under mind control, he has murdered a lot of people, and he needs to learn how to deal with that in order to move forward. 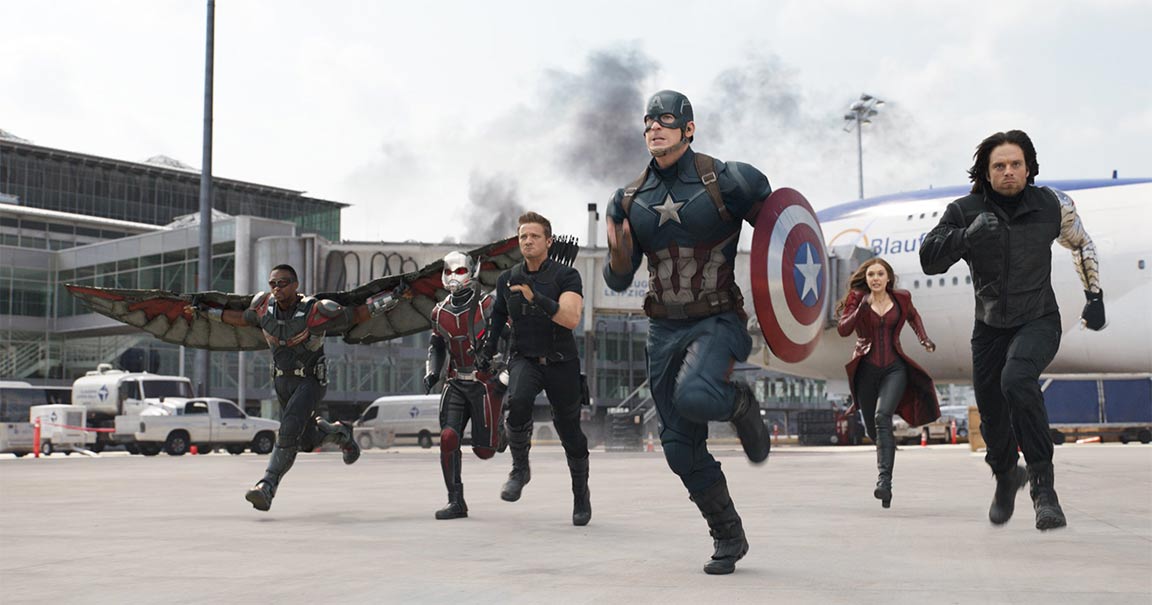 When it comes to comic book movies, nobody does it better than Marvel. Sorry, DC. Since the release of Iron Man in 2008, Marvel has dominated the genre by consistently producing high quality films, with gripping storylines, stunning visuals and... a rarity among movies of the genre..a cast that can actually act.

The Marvel Cinematic Universe (MCU) is also a triumph because it has successfully interwoven multiple character's storylines into multiple movies, giving the opportunity for crossovers and standalone films galore. It's little wonder that the MCU has a slate totally full of potential blockbusters lined up until at least 2020.

Captain America: Civil War might be the ultimate comic book movie ever. Certainly it's Marvel's best effort to date. Tony Stark (Iron Man) and Steve Rogers (Captain America) are at war, with the powers that be insisting that the Avengers need some kind of oversight. Tony agrees, Steve does not, and thus, Civil War is born.

This trailer only showcases a few of the characters we can expect to see. Iron Man and Cap, obviously, plus Bucky Barnes. There's also plenty of Black Widow (just give her her own movie already) as well as Black Panther, who is really great in the movie. As well as these, we can expect to see Ant-Man, Hawkeye, Falcon, War Machine, Vision, Scarlet Witch and, in a Marvel first, Spider-Man.

The trailer showcases the movie well; we can expect bigger and better special effects wrapped around a really fascinating story of friendship and betrayal, which ultimately changes the shape of the MCU moving forward.