Academy Award-winning writer-director Andrew Stanton and the inventive storytellers and technical geniuses at Pixar Animation Studios transport moviegoers to a galaxy not so very far away for a new computer-animated cosmic comedy about a determined robot named WALL•E.

After hundreds of lonely years of doing what he was built for, WALL•E (short for Waste Allocation Load Lifter Earth-Class) discovers a new purpose in life (besides collecting knick-knacks) when he meets a sleek search robot named EVE. EVE comes to realize that Wall•E has inadvertently stumbled upon the key to the planet's future, and races back to space to report her findings to the humans (who have been eagerly awaiting word that it is safe to return home). Meanwhile, Wall•E chases EVE across the galaxy and sets into motion one of the most exciting and imaginative comedy adventures ever brought to the big screen.

Joining Wall•E on his fantastic journey across a universe of never-before-imagined visions of the future, is a hilarious cast of characters including a pet cockroach, and a heroic team of malfunctioning misfit robots.

Wall•E is the first Pixar movie to be nominated for 6 Academy Awards, which ties it with Beauty and the Beast; the only other animated movie to receive so many nods.

At the start of this trailer, Wall•E replaces the broken bulb in the bouncing Pixar lamp, replacing it with an energy efficient one.

This is the first Pixar movie to use live action. 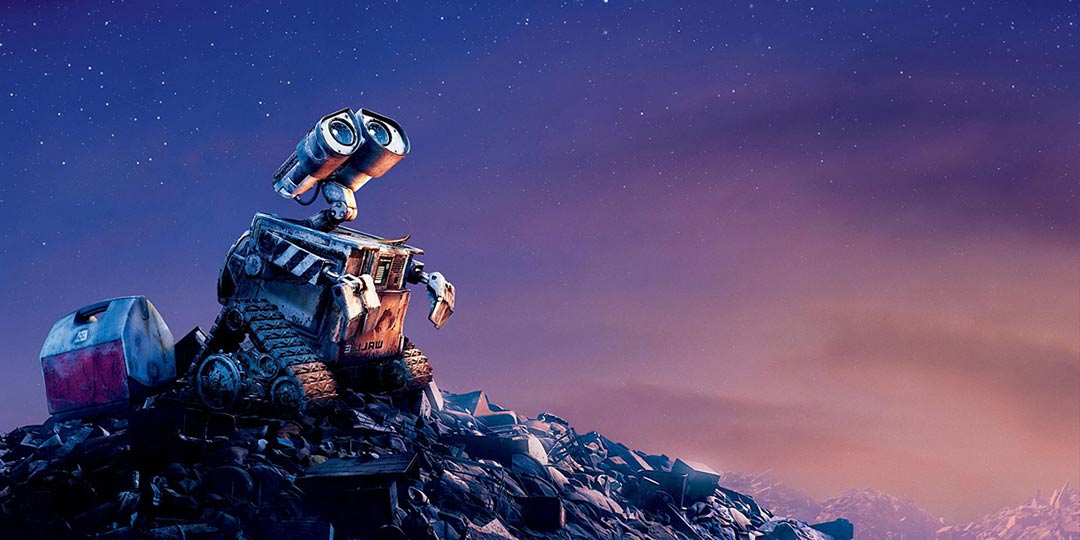 Pixar brings us a film with a difference here; one which doesn't rely on dialogue to tell this sweetly charming love story between two robots. Okay, before you switch off, let me just say this; Wall•E is a film that should be watched at least once. Not only is it cute, it also delivers powerful messages about consumerism, and how humans are treating planet earth.

Wall•E exists on earth alone, clearing up the huge amount of trash that humans have left behind. The humans haven't died out, rather they've moved to another planet after making such a mess of earth. Wall.E might be a robot but he is compassionate, kind, and in need of company. That company finally arrives in the form of Eve, a robot from another planet, sent to investigate earth. The problem is, though both Eve and Wall•E are on pre-programmed missions. Can they overcome their programming and find their own free will, or is their path already determined?

Whether you enjoy geeking out over robots or not, Wall•E is a great example of how brilliant a non-verbal character can be. The relationship that develops between him and Eve will tug on the heartstrings, and it's easy to see how this movie became critically acclaimed.

This trailer promotes the movie well, but doesn't really give a good enough overview of the storyline to do the film justice. For me, Wall•E was hard going at times, but that's because I really love strong dialogue in movies, which this one doesn't have. That said, the wider message this film promotes, which is to remind us to be grateful for our planet and look after it, really comes across.