Sexy college juniors Cassidy (Briana Evigan), JESSICA (Leah Pipes), Claire (Jamie Chung), Ellie (Rumer Willis) and Megan (Audrina Patridge) are sorority sisters sworn to trust, secrecy and solidarity, no matter what. But their loyalty is tested when a prank at a raucous house party goes terribly wrong and Megan ends up brutally murdered. Rather than confess to the crime and risk destroying their bright futures, the girls agree to hide the bloody corpse and keep their secret forever.

Fast forward one year to graduation. As they prepare to say goodbye to the house and each other, the girls plan one last alcohol-fueled bash on Sorority Row, confident their dark secret remains buried. But does it? As the party rages in the front yard, the bedrooms and the hot tub, the girls receive cell phone videos taken the night of Megan's murder from an anonymous sender who threatens to forward the videos to the police. Then, one by one, the sisters and their unsuspecting boyfriends are stalked by an unseen killer.

Has Megan returned from the dead to exact her revenge? Or was their secret discovered by someone else — someone now determined to make them pay? Trapped, the girls race to figure out which of them let their secret slip, who wants them dead, and how to fight back as the bodies pile up and their beloved sorority house explodes into flames. A heart-stopping climax reveals the killer's shocking identity in this suspenseful, hip and sexy remake of the 1983 classic horror thriller.

Sorority Row is a remake of the 1983 film The House on Sorority Row. The writer/director of the original film, Mark Rosman serves as executive producer for the remake.

The movie was intended on being R-rated. After the success of another remake, Prom Night with its PG-13 rating, Summit Entertainment planned on trimming the film to also be a PG-13 film. In the end, it was decided that the film should maintain its R-rated content.

The fictitious college in Sorority Row is called Rosman University and is named after the writer/director of the original 1983 film, Mark Rosman. 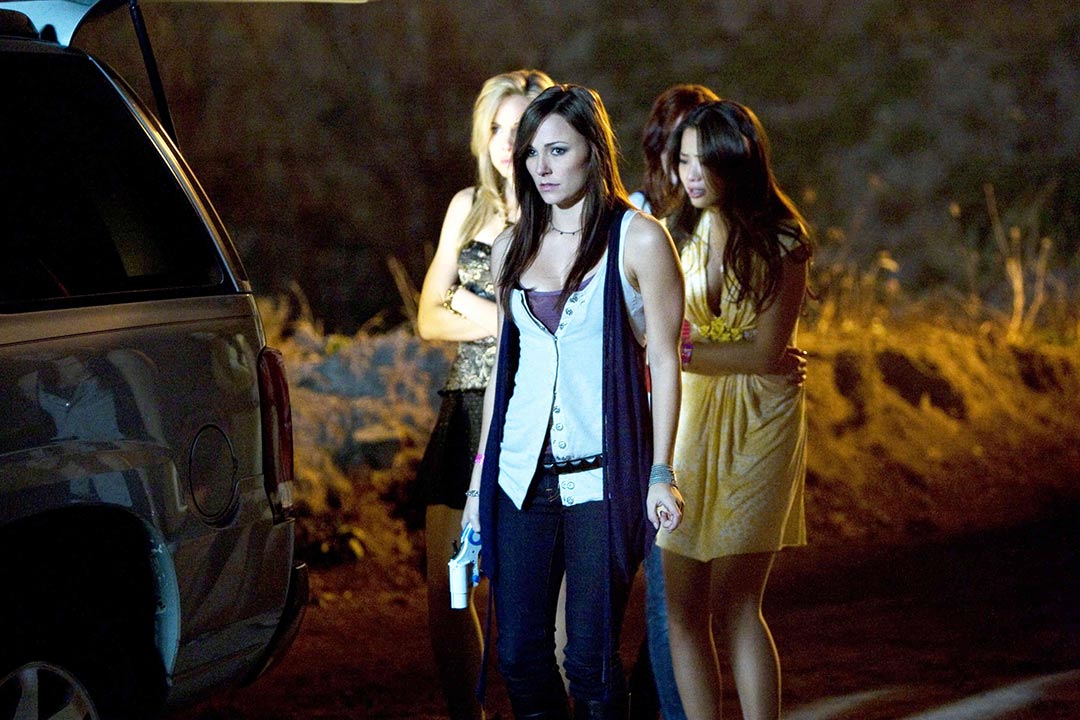 In reality, Sorority Row seems like a by-the-numbers slasher film in which one beautiful young woman after another get killed in a disgusting way after a few minutes of tripping and running away from a masked killer. The accidental death of a friend that comes back to haunt the group with a secret is also a common plot point, especially when it happened after an intended practical joke. That being said, Sorority Row looks like a good amount of fun.

When Audrina Patridge appeared on screen, it seemed like such a stunt casting decision to cast a woman from a fad MTV reality show, but she gets killed off early on so at least we will not have to worry about her potential bad acting for long, it is what I like to call the “Paris Hilton getting a wood beam through her head” solution. One question about the prank, how on earth did the guy who is getting pranked on not think to check the girl's pulse? Clearly, she is awake and her adrenaline is pumping as she laughs with her friends when he is looking the other way. Also, who bludgeons a supposedly dead girl for no reason? Talk about beating a dead horse. Obviously, this guy was looking for a reason to kill the girl.

The best part of the trailer is Carrie Fisher playing the sorority house mother. The trailer for Sorority Row is nothing extraordinary, but it also looks oddly entertaining and may have a few good scares to hold the attention of fans of bad horror movies everywhere.