Feature Trailer for Inside Out.

Growing up can be a bumpy road, and it's no exception for Riley, who is uprooted from her Midwest life when her father starts a new job in San Francisco. Like all of us, Riley is guided by her emotions – Joy (Amy Poehler), Fear (Bill Hader), Anger (Lewis Black), Disgust (Mindy Kaling) and Sadness (Phyllis Smith). The emotions live in Headquarters, the control center inside Riley’s mind, where they help advise her through everyday life. As Riley and her emotions struggle to adjust to a new life in San Francisco, turmoil ensues in Headquarters. Although Joy, Riley's main and most important emotion, tries to keep things positive, the emotions conflict on how best to navigate a new city, house and school.

Inside Out focuses on five core emotions; Joy, Fear, Sadness, Anger, and Disgust. The writers considered up to twenty seven different emotions, but decided to focus on these five. Each emotion is animated to look like something pertaining to its qualities; Joy is based on a star, Anger is a brick, Sadness a tear drop, Fear a live nerve, and Disgust is based on broccoli!

It is mentioned several times in the movie that the central character, Riley, dislikes broccoli. In Japan, this was changed to green peppers, since it's more disliked by Japanese children.

Inside Out marks the fifteenth time John Ratzenberger has made an appearance in a Pixar film. He's a Pixar frequent.

Disgust was originally set to be a male character, and was only changed after Mindy Kaling was cast for the role.

Lewis Black was Pixar's first and only choice for the role of Anger. 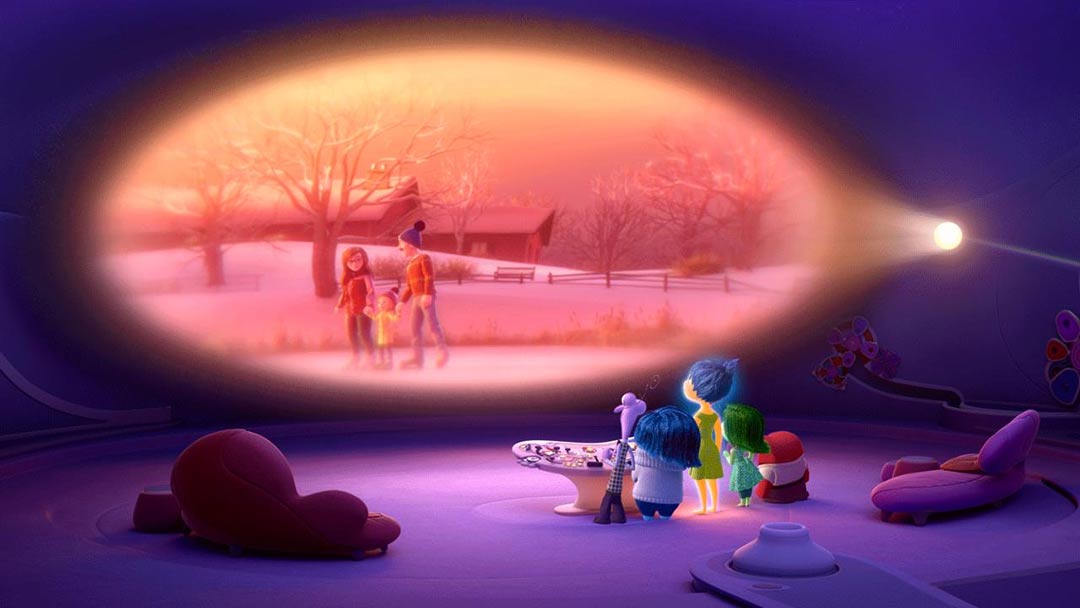 Pixar has always been consistent in delivering great movies, as well as a few which surpass that and, in my opinion, count as exceptional films, animated or otherwise. Inside Out definitely falls into the latter category.

The premise is smart; 12 year old Riley is struggling with her conflicting emotions surrounding growing up and moving to a new state. Pixar takes us inside her head, to meet her emotions and see how they control Riley's behavior.

Each one behaves pretty much as you'd expect; Joy is permanently upbeat and trying to make the best of everything, Disgust is appalled by it all, Anger is prone to fiery outbursts, Fear worries constantly and Sadness needs a lot of distraction to stop her from bringing anyone else down. Until now, Joy has always been in charge, but Riley is changing, and the world around her is changing too. As she struggles to adjust, her emotions spiral out of control, until Joy and Sadness end up going on a journey into Riley's long-term memory.

It's incredibly hard to emphasize exactly how great this movie is, and although the Inside Out trailer is good, it still can't do the film justice. You will laugh, cry, and identify with everything Riley is going through, and for adults, we can identify with the emotions of her parents, too.

Pixar has taken a difficult subject, a tricky premise, and absolutely nailed it. I wasn't expecting Inside Out to work at all, much less be as brilliant as it is, but Pixar have once again proven themselves to be the best at what they do.