Robert Neville (Will Smith) is a brilliant scientist, but even he could not contain the terrible virus that was unstoppable, incurable?and manmade. Somehow immune, Neville is now the last human survivor in what is left of New York City?and maybe the world. But he is not alone. He is surrounded by 'the Infected' ?victims of the plague who have mutated into carnivorous beings who can only exist in the dark and who will devour or infect anyone or anything in their path. For three years, Neville has spent his days scavenging for food and supplies and faithfully sending out radio messages, desperate to find any other survivors who might be out there. All the while, the Infected lurk in the shadows, watching Neville?s every move, waiting for him to make a fatal mistake. Perhaps mankind?s last, best hope, Neville is driven by only one remaining mission: to find a way to reverse the effects of the virus using his own immune blood. But his blood is also what The Infected hunt, and Neville knows he is outnumbered and quickly running out of time.

I Am Legend star Will Smith liked his canine costar Abbey so much that he tried to adopt her after filming was over. Even with Will Smith asking, the dog’s trainer still wouldn’t give her up.

While doing press for I Am Legend, Will Smith accidentally revealed the ending of the movie to a crowd of entertainment reporters in Japan. Warner Brothers then asked all the reporters and other people present to not spoil the ending, which they did without any sort of payoff.

During one scene where Will Smith’s Dr. Robert Neville is seen walking a deserted street, a billboard for with a Batman and Superman logo superimposed on each other can be seen in the background. At the time, this was more of a joke directed at screenwriter Akiva Goldsman who had worked on a script for a Batman Versus Superman movie in 2002. 2016 sees an actual Batman v Superman movie being released. 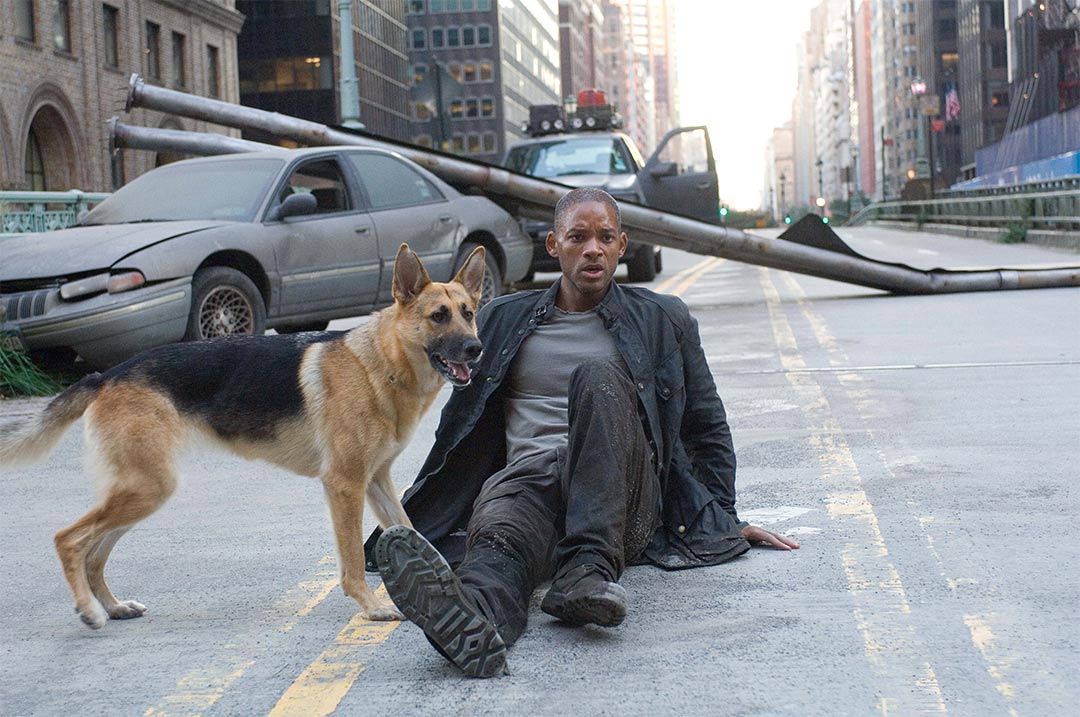 The I Am Legend trailer treats us to a day in the life of Dr. Robert Neville, possibly the last man alive on Earth after a viral outbreak has either killed most of the human population or turned them into a zombie like creature that keeps to the shadows and darkness. Neville spends his days with his dog, gathering food, hunting, watching DVDs, and looking for other survivors. It’s a relatively normal existence, if you can get past the empty buildings, overgrown streets, and loneliness. It’s at night that Neville has to be afraid, as he locks down his house and has to listen to the inhuman shrieks of whatever is outside, creatures that seemingly want nothing more than to kill him.

The trailer sets up nicely Neville’s normal routine before making it clear that he’s still in danger. It is a man and his dog against seemingly a whole city of creatures that want them dead. The quieter moments of the trailer make it seem that Will Smith will easily be able to carry the movie as likely the only main character, and the action sequences look fun. Things don’t look good for Robert Neville, but I Am Legend looks promising.