Universal are out to make their intellectual property worth billions at the box office. Earning the rights to a slate of classic monster movies from The Mummy to Dr. Jekyll/Mr. Hyde, The Invisible Man, Bride of Frankenstein, Frankenstein, Van Helsing, Wolfman and The Creature from the Black Lagoon, a number of the cast have come together for a photoshoot on the day a new trailer dropped.

Alongside The Mummy co-stars Sofia Boutella, Tom Cruise and Russell Crowe (Jekyll) are Javier Bardem (Frankenstein) and Johnny Depp (The Invisible Man), with the Pirates 5 pair gearing up for their individual installments in the newly established Dark Universe. When the Cruise blockbuster premieres on June 9, the next cab off the rank is expected to be Bride of Frankenstein to open on Valentine's Day 2019.

Universal: This Is Strategic Reimagining With Star Power Kick 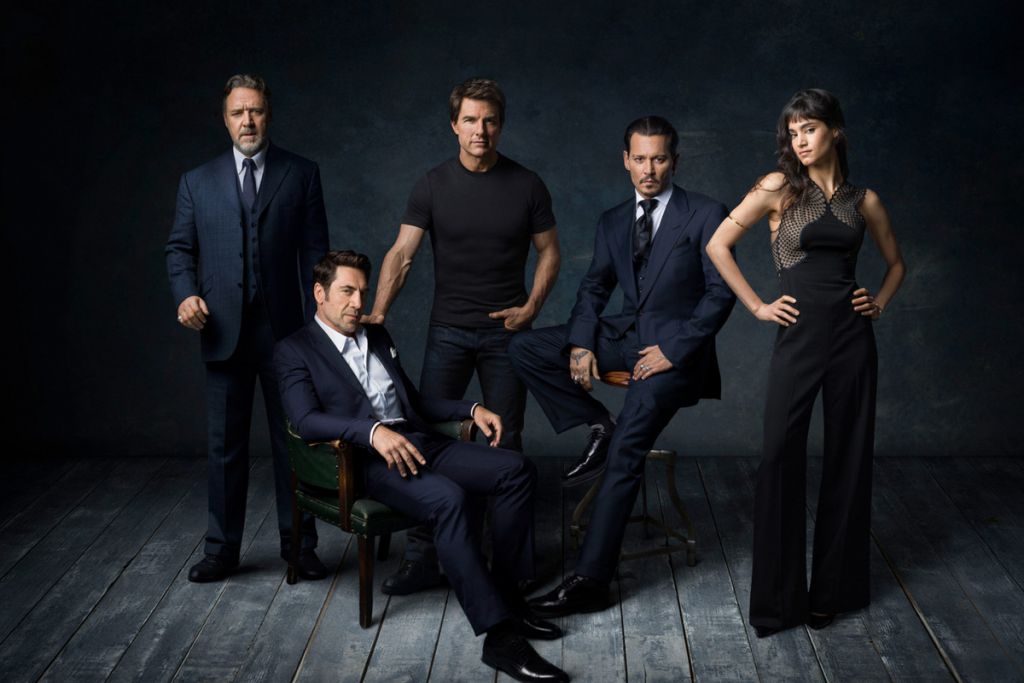 Universal Pictures Chairman Donna Langley confirmed the news that Bill Condon will take the helm of Bride of Frankenstein and explained that each title in the series will have time and scope to work their own creation.

"We take enormous pride in the creativity and passion that has inspired the reimagining of Universal's iconic monsters and promise audiences we will expand this series strategically. The enterprise masterfully developed by Chris (Morgan) and Alex (Kurtzman) will allow each subsequent chapter the right time to find the perfect cast, filmmakers and vision to fulfill it. As we launch Dark Universe with Danny's (Elfman composer) provocative theme before The Mummy and collaborate with a brilliant filmmaker like Bill (Condon director) to weave the story of a very modern woman in a very classic tale, we feel confident we're off to a tremendous start."

Elfman himself admitted that the reboot of the classical narrative portrayed on film in black and white is a childhood dream come true.

"I grew up on monsters. Monsters were my life, and these iconic Universal monsters were almost like my family," the composer recalled. "I simply wouldn't be the same without them. When I got the opportunity to compose a theme for the Dark Universe logo, of course I jumped at it. What could be more fun than connecting to this world that has always been so deeply imbedded in my psyche?

I tried to find something that was new but still had some connections with the past, the origins, at least in a subtle way. Something that was looking forward to a creative, fertile, imaginative future that Dark Universe will enter, and at the same time saluting the heritage of the tragic heroes (or anti-heroes) of my childhood. To the Monsters!!!!"

Producers: We Are Making Something Old New Again

Director Bill Condon will transition from Beauty and the Beast to a new challenge, adapting a vintage horror installment that is expected to stay within the PG-13 parameters.

"I'm very excited to bring a new Bride of Frankenstein to life on screen, particularly since James Whale's original creation is still so potent. The Bride of Frankenstein remains the most iconic female monster in film history, and that's a testament to Whale's masterpiece, which endures as one of the greatest movies ever made."

Producers Chris Morgan and Alex Kurtzman both provided a joint statement to say that they want the ideal scenario - bring in the diehards and invite some newcomers to the party.

"When Universal approached us with the idea of reimagining these classic characters, we recognized the responsibility of respecting their legacy while bringing them into new and modern adventures. The studio and our fellow creative collaborators have championed and challenged us as we've begun to spin the web of Dark Universe. It's our hope these movies will engross longtime fans and spark the imaginations of brand-new ones."