Supernatural comedy focuses on two men who have found a way to survive a world overrun by zombies. Columbus (Jesse Eisenberg) is a big wuss - but when you're afraid of being eaten by zombies, fear can keep you alive. Tallahassee (Woody Harrelson) is an AK-totin', zombie-slayin' badass whose single determination is to get the last Twinkie on earth. As they join forces with Wichita (Emma Stone) and Little Rock (Abigail Breslin), who have also found unique ways to survive the zombie mayhem, they will have to determine which is worse: relying on each other or succumbing to the zombies.

Patrick Swayze was offered a cameo in Zombieland before his cancer diagnosis.

Jamie Bell was originally cast as Columbus, but dropped out. Taylor Lautner was considered as a replacement but couldn't do it, so the role went to Jesse Eisenberg.

Director Reuben Fleischer said that Shaun of the Dead inspired him to make Zombieland. 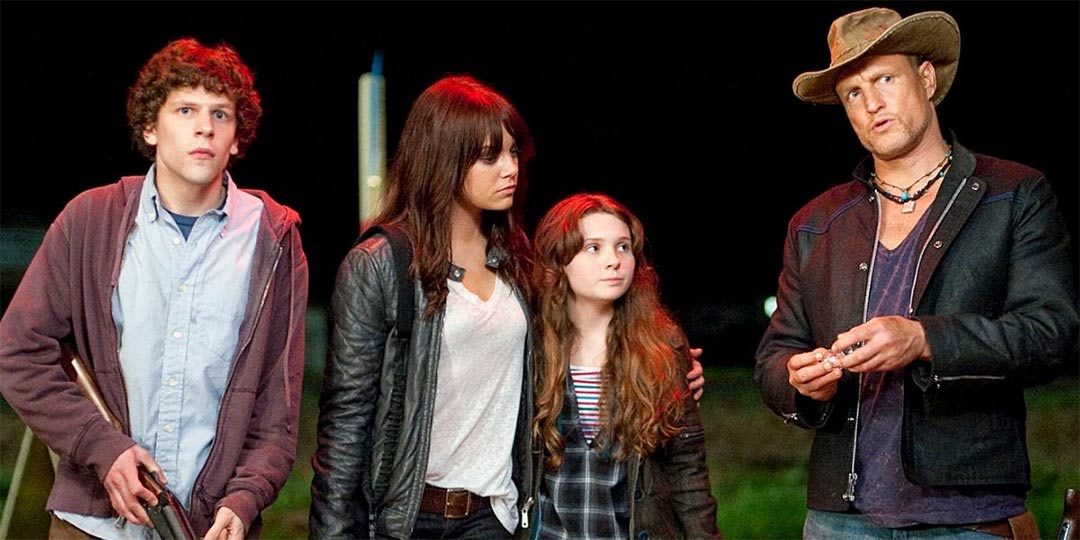 Zombies lend themselves perfectly to comedy because they really are quite comical creations. Killing them is always fun, whether it's in video game format, on TV or on the big screen. If you add Woody Harrelson into the mix, you've got a sure fire hit on your hands, right? Let's face it, Harrelson is always going to be one cool guy.

Zombieland is a zombie comedy that works really, really well. That point is proven from the overwhelmingly positive reviews this film received, the massive box office success it enjoyed, and from the fact that a sequel has just been ordered. I can't be the only one who's excited to know it's coming back.

Harrelson is pure brilliance as Tallahassee, the gun toting zombie killing guy who keeps his cool persona throughout. All he wants, literally, is to get his hands on the last Twinkie. Time is on his side, let's face it, since those things last for years.

He joins forces with Columbus, who is a total wimp and surviving the zombie apocalypse purely out of fear. Witchita and her sister, Little Rock, just want to get to a theme park. The four travel together, kicking zombies asses as they go.

This movie is frivolous, fun and utterly silly. It has the perfect mix of black humor, zombie killings, and visual gags. I am exceptionally squeamish, but I can easily laugh at the gore and grossness here because it's all delivered so well. Did I mention how cool Harrelson is in the trailer? It's worth watching again, just to revel in his awesomeness.