Two people find out they have gotten married after a night of debauchery in Las Vegas. One of them ended up winning a huge jackpot after playing the other's quarter, so they try get their hands on the money and end up falling in love along the way.

Cameron Diaz and Ashton Kutcher revealed in an interview that they were both drunk for the filming of the wedding scene, to make it seem more realistic. The scene had to be filmed multiple times due to their behavior and a copy of the outtakes appeared online. It was removed by Fox.

On Joy's first day at work after getting married, she leaves for work in a blue dress, is shown at work wearing a gray dress, and then shows up to marriage counseling wearing a blue dress again.

Cameron Diaz's party trick is performed in this movie as well as in Charlie's Angels: Full Throttle. 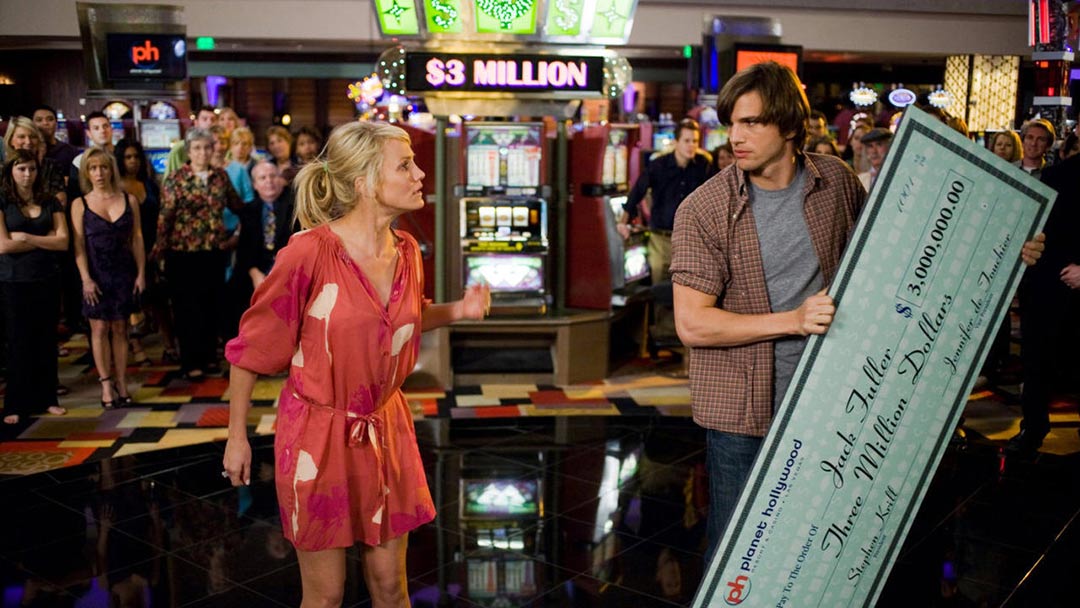 Both Cameron Diaz and Ashton Kutcher are actors whose best roles are probably behind them already. For Kutcher, his time on Two and a Half Men will be what he's best known for, and his role in Dude, Where's My Car?. Diaz has had quite a good career too, with roles in The Mask and There's Something About Mary making her really stand out, as well as The Holiday.

Given that they're not bad actors, and certainly well-known names, it baffles me that they would wast their time making a formulaic rom-com which falls flat even from the trailer. That's right, the trailer, which is supposed to highlight the movie's best bits, is weak. In that case, the film doesn't stand much of a chance, does it?

The plot is predictable from the title; Jack and Joy both head to Vegas after tough times in their personal lives. They get drunk, they get married, because that is what every single person does on a trip to Vegas. That or gambling away their fortune. In this instance, our couple don't lose money, though. They win some. Three million dollars, to be exact.

Given that they don't know or like each other, they want a divorce and to split the money, but a judge orders them to work at their marriage for six months before he will allow them access to the cash. Of course, we all know what's coming, and the trailer doesn't even attempt to hide the predictable ending; Jack and Joy fall in love.

The attempts at comedy don't really amount to anything in the trailer which is just flat and dull. Kutcher and Diaz don't really seem to share much chemistry either, which again doesn't entice me into watching. All in all, What Happens in Vegas is a film I want to avoid.