The horrifying events that took place in the Hoyt family’s vacation home at 1801 Clark Road on February 11, 2005, are still not entirely known.

Champagne. Rose petals. Candlelight. It was supposed to be a night of celebration for Kristen McKay (Liv Tyler) and James Hoyt (Scott Speedman). But after leaving a friend’s wedding reception and returning to the house, everything had collapsed for the happy couple.

Then came a 4 a.m. knock on the door and a haunting voice.

Writer/director Bryan Bertino explores our most universal fears in The Strangers, a terrifying suspense thriller about a couple whose remote getaway becomes a place of terror when masked strangers invade. The confrontation forces Kristen and James to go far beyond what they thought themselves capable of if they hope to survive.

Liv Tyler wanted to appear realistically exhausted and terrified after the intruders become known. She would do laps around the house and jumping-jacks.

Director Bryan Bertino claimed the film was based on a time when he was a child and someone came to his family’s door asking for someone who did not live there. Later, they discovered that houses on his street had been robbed. The film is also similar to a real life 1981 murder, the Keddie Resort murder in Northern California.

Many theaters in the United States were sent a copy of the film that had sound issues. The copies had a few scenes which were each a few minutes, where the sound was missing and audiences could only hear static. Most of the viewers did not notice that there was an issue because the lack of sounds and presence of static went along with the rest of the film’s atmosphere.

The exteriors of the house were filmed at a real farm house which was an ideal location that happened to have all of the features needed for the script. The inside of the house was a set. 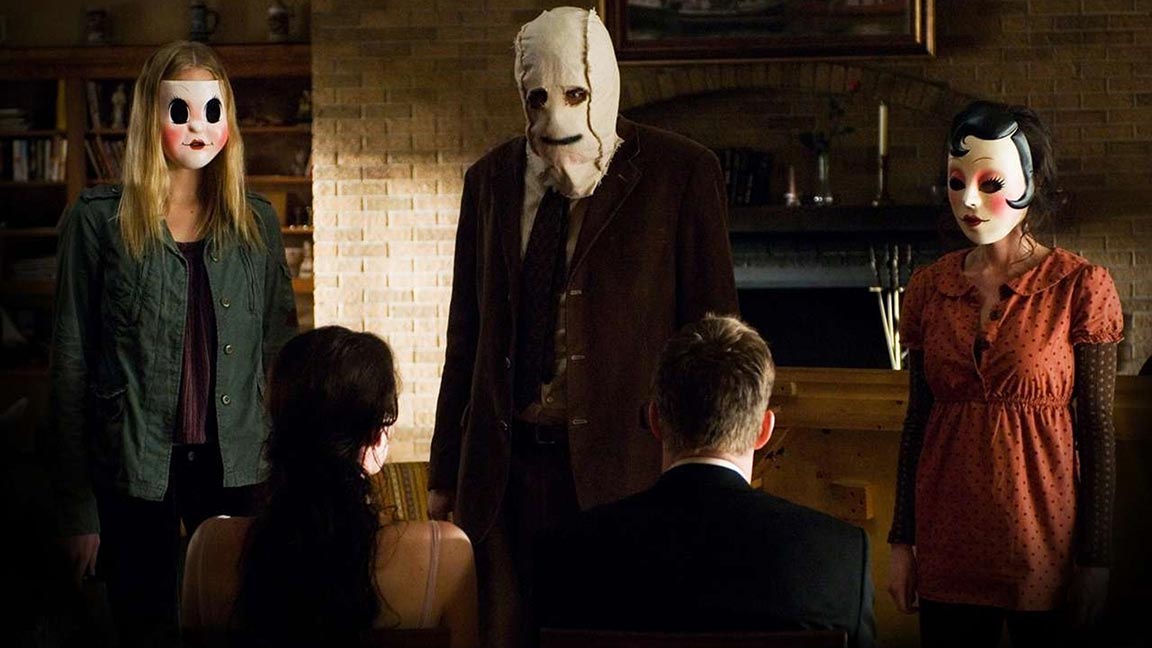 The trailer for The Strangers is the perfect example of how to make an awesome horror movie trailer. The trailer begins with a couple played by the delightful Liv Tyler and Scott Speedman, in a large house that is situated not completely out of nowhere, but may as well be. After a loud unidentifiable sound, things get a little frightening. A creepy creaks of a swing swinging outside in the darkness while the lighting of the visual patterns the back and forth of the swing is absolutely ominous.

The trailer then shows a shot of Liv Tyler standing near a kitchen with a masked figure standing behind her and everything is terrifying. The timing of that moment is just phenomenal. Throw in a record player that begins playing eerie music and a sudden crash through the front door with an ax and we have a truly terrifying flick on our hands. The appearance of the three masked individuals terrorizing the couple cut with the skipping of the record is enough to leave one breathless.

The trailer culminates in a final nerve rattling response after Tyler asks why them, “Because you were home”, bring that terror home. The Strangers is an exceptionally good and horrifying film and the trailer highlights that fact.