Theatrical trailer for The Program, which was distributed for the film's US release.

From Academy Award nominated director Stephen Frears (The Queen) and producers Working Title Films, comes the true story of the meteoric rise and fall of one of the most celebrated and controversial men in recent history; Lance Armstrong, the world-renowned Tour de France champion.

The world needs heroes and Lance Armstrong was the ultimate sporting hero. Following a gruelling battle with cancer, Lance returned to his cycling career in 1999 more determined than ever and with his sights set firmly on winning the Tour de France. With the help of the infamous Italian physician Michele Ferrari and team director Johan Bruyneel, he developed the most sophisticated doping program in the history of the sport. This program allowed Lance and his American teammates to dominate the world of cycling, winning the Tour an unprecedented seven times.

However not everyone believed the fairytale... Sunday Times journalist, David Walsh, at first charmed by Lance’s charisma and talent, soon began to question whether the ‘world’s greatest athlete’ was ‘clean’. Walsh sought to unveil the truth, his ensuing battle with Armstrong risked his own career, ostracised him from the cycling community and cost his paper, The Sunday Times, hundreds of thousands in legal costs. But the indefatigable Walsh eventually uncovered the truth when a select few prepared to talk came forward, exposing one of the greatest deceptions of our time.

The Program was inspired by the award winning book Seven Deadly Sins by David Walsh. In order to prepare for the role, Ben Foster also took performance-enhancing drugs under the medical supervision of a doctor. Talk about going method! While the training was hard, Foster said the emotional strain of playing a disgraced hero was even more demanding. 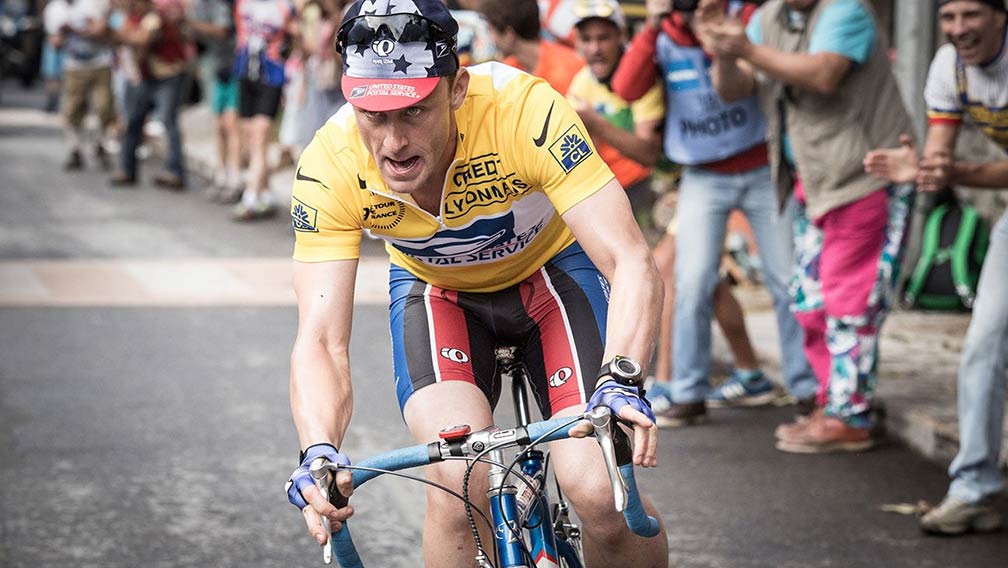 We love Ben Foster, and nobody can deny that he looks the part and seems a clone of Armstrong when the camera tracks him racing. The film has been promoting itself as a thriller rather than just a sport biopic, and The Program trailer definitely fits the suspense-thriller genre; thanks in part to the music.

Throw in Foster [creepily] sealing his lips to a blurry camera shot and we're captivated by what we're seeing.

Our only concern is that it did take a bit of time for the film to find a domestic distributor. What aren't we seeing? Is the film too real, too dark, not the right tone, not factual enough or too exaggerated? The trailer looks spot on, so we will have to see what we might be missing from this The Program trailer come March.