Trailer for The Pirates! Band of Misfits.

In The Pirates! Band of Misfits, Hugh Grant stars in his first animated role as the luxuriantly bearded Pirate Captain – a boundlessly enthusiastic, if somewhat less-than-successful, terror of the High Seas. With a rag-tag crew at his side (Martin Freeman, Brendan Gleeson, Russell Tovey, and Ashley Jensen), and seemingly blind to the impossible odds stacked against him, the Captain has one dream:... to beat his bitter rivals Black Bellamy (Jeremy Piven) and Cutlass Liz (Salma Hayek) to the much coveted Pirate Of The Year Award. It’s a quest that takes our heroes from the shores of exotic Blood Island to the foggy streets of Victorian London. Along the way they battle a diabolical queen (Imelda Staunton) and team up with a haplessly smitten young scientist (David Tennant), but never lose sight of what a pirate loves best: adventure!

The Pirates! Band of Misfits comes from Aardman animation- the same company who gave us Wallace and Gromit. It is filmed using stop animation, with CG for the backgrounds.

In the U.K., the movie is called The Pirates! In an Adventure With Scientists!

The line in the trailer "This is a leper boat" was cut after leprosy charities protested. Instead it is changed to "This is a plague ship."

In real life, Charles Darwin was a member of the Glutton Society, which involved eating unusual animals such as parakeet or owls. 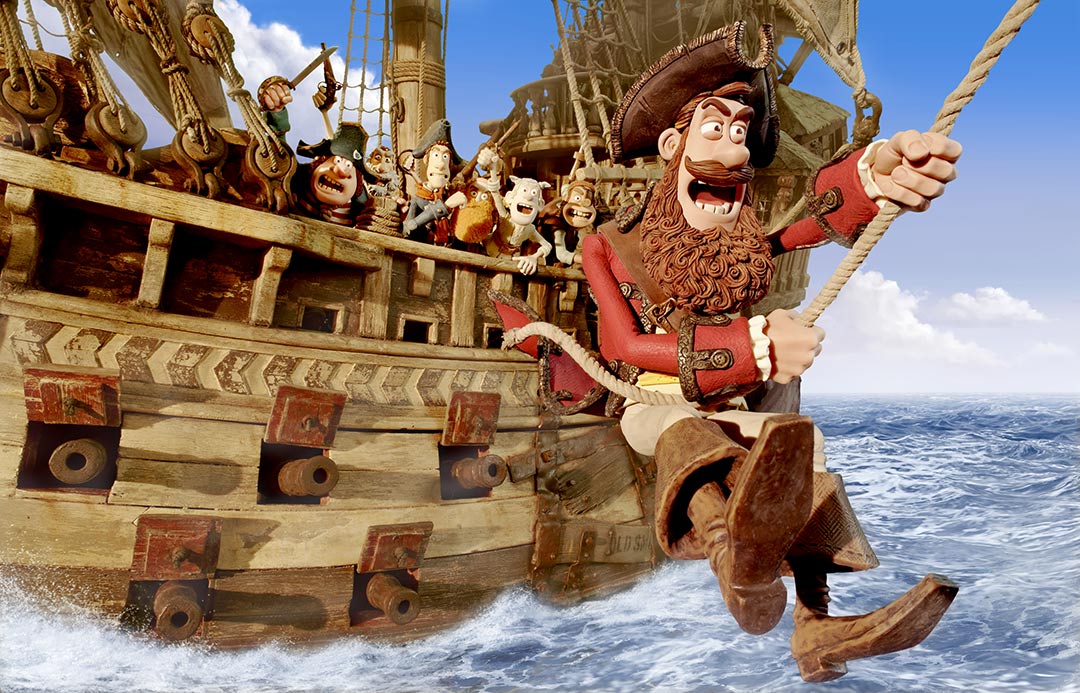 Hugh Grant is possibly the least likely person anyone could imagine to voice a pirate captain and yet, he does just that in The Pirates! Band of Misfits. Not only that, but he's really rather good at it, too.

In fact, he's the highlight of this film, along with David Tennant who lends his voice to the character of Charles Darwin (yes, that one).

The trailer for this movie highlights a lot of the best bits but there are some great gags throughout the movie. Aardman's animation is always fun to watch, and extremely smart. I've never seen better stop motion animation than appears in their films and for this reason alone, if you're a fan of animated films, you need to give it a watch.

For some reason though, Pirates loses its way in the course of the film, and it's not a navigational error, either. My son loves it, but I find myself tuning out and then tuning back in. The jokes seem to be connected loosely by an overly complicated plot, which is a real shame since it has the potential to be a great film, given the quality of animation and the all-star voice cast.

Kids will enjoy it, if they can keep up with what's happening, since it's a totally non-threatening Pirate movie and with lots of laugh out loud jokes.