In the comedy, "The Love Guru" (Myers), Pitka is an American who was left at the gates of an ashram in India as a child and raised by gurus. He moves back to the U.S. to seek fame and fortune in the world of self-help and spirituality. His unorthodox methods are put to the test when he must settle a rift between Toronto Maple Leafs star hockey player Darren Roanoke (Malco) and his estranged wife. After the split, Roanoke's wife starts dating L.A. Kings star Jacques Grande (Timberlake) out of revenge, sending her husband into a major professional skid -- to the horror of the teams' owner Jane Bullard (Alba) and Coach Cherkov (Troyer). Pitka must return the couple to marital nirvana and get Roanoke back on his game so the team can break the 40-year-old "Bullard Curse" and win the Stanley Cup.

The Love Guru marks the third time Mike Myers worked with Verne Troyer. The two worked together in Austin Powers: The Spy Who Shagged Me and Austin Powers in Goldmember. In those films, Troyer played Mini-Me while Austin Powers played both Austin Powers and Dr. Evil.

In 1998, there were reports that Mike Myers would play a fourth character in Austin Powers: The Spy Who Shagged Me, that character would be the Love Guru. This character did not end up in the film but returned ten years later in his own movie.

The film had a budget of a staggering $62 million. The box office return was a disappointing $40 million worldwide with over $32 million of that made in the United States. 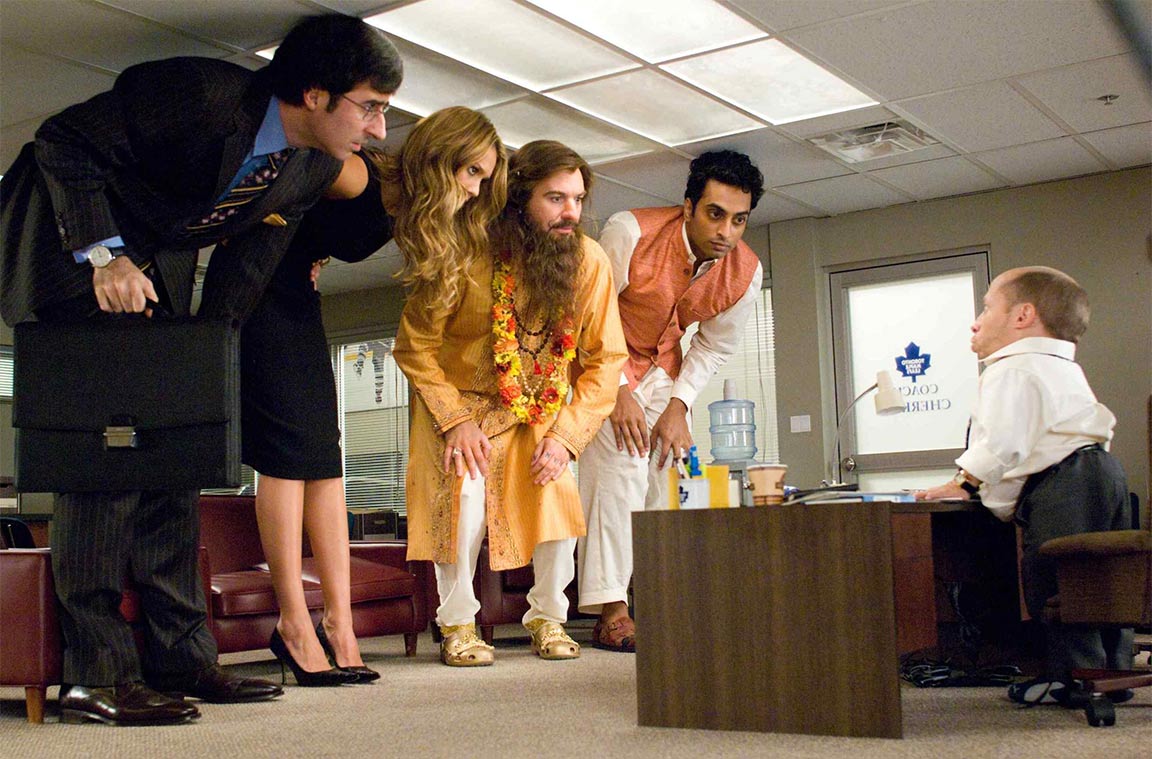 You know how sometimes really old people say things that seem racist or culturally insensitive but you let it slide because, well, they’re old and that is all they know so even though may be wrong it is hard to be too angry? The trailer for The Love Guru is like that.

It would be more offensive if it wasn’t for the fact that it is so clueless and out of touch with reality that it almost seems too sad to complain about. Mike Myers used to make brilliant comedies, Wayne’s World, the underrated So I Married an Ax Murderer, and Austin Powers. Just as the final movie of the series, Austin Powers in Goldmember lacked all the charm of the first two and became desperate for jokes, The Love Guru seems to continue flailing around for laughs. Myers is the title character who is some jumble of ethnicities even though he is coming from India? Maybe Myers is just really bad at accents or looking like anything resembling ethnic. Justin Timberlake gets a chance to chew the scenery which is good for him. Jessica Alba is expected to say little while being beautiful which may be her biggest talent. Verne Troyer is there too purely because Myers employed him previously as mini-me and still had a few little people jokes left in his arsenal. The problem, well one of the many problems with The Love Guru is that the humor and timing of the jokes are recycled from Myers’s better films.

It is hard to tell if Myers is running out of steam or if he is just throwing anything at audiences hoping something will stick because he has plenty of money and does not need to try as hard. Romany Malco plays the hockey player The Love Guru is hoping to help, and frankly Malco is way too funny and charming to be in this rubbish.

Overall the trailer for The Love Guru is a big disappointment and an embarrassing next step away from the once genius Mike Myers. Is it better to burn out or fade away?