Feature trailer for The Hangover.

Two days before his wedding, Doug and his three friends drive to Las Vegas for a blow-out bachelor party they'll never forget. But, in fact, when the three groomsmen wake up the next morning, they can't remember a thing. For some reason, they find a tiger in the bathroom and a six-month-old baby in the closet of their suite at Caesars Palace. The one thing they can't find is Doug. With no clue as to what transpired and little time to spare, the trio must retrace their hazy steps and all their bad decisions in order to figure out where things went wrong and hopefully get Doug back to L.A. in time to walk down the aisle.

Ed Helms, who plays Stu, never had an adult incisor tooth grow. Therefore, no prosthetics were needed for the scenes where his character has lost a tooth, since Helms just took his fake one out.

Three sets of twins and a dummy were used to portray the baby. Given that the baby goes through some rough times, including a having a car door opened into his head, it's just as well that a dummy was on hand.

Ed Helms fake vomits in every Hangover movie, and he is also seen in his underwear.

Jeremy Piven and Seth Rogen were both considered for the part of Stu.

The Hangover had a major impact on Las Vegas and in particular, Caesar's Palace. Staff report that guests often quote lines from the movie at them, including "Did Caesar actually live here." Hangover-themed slot machines also became popular, and the Las Vegas Visitors Authority received many inquiries from tourists who wanted to recreate scenes from the film, especially those involving the tiger. 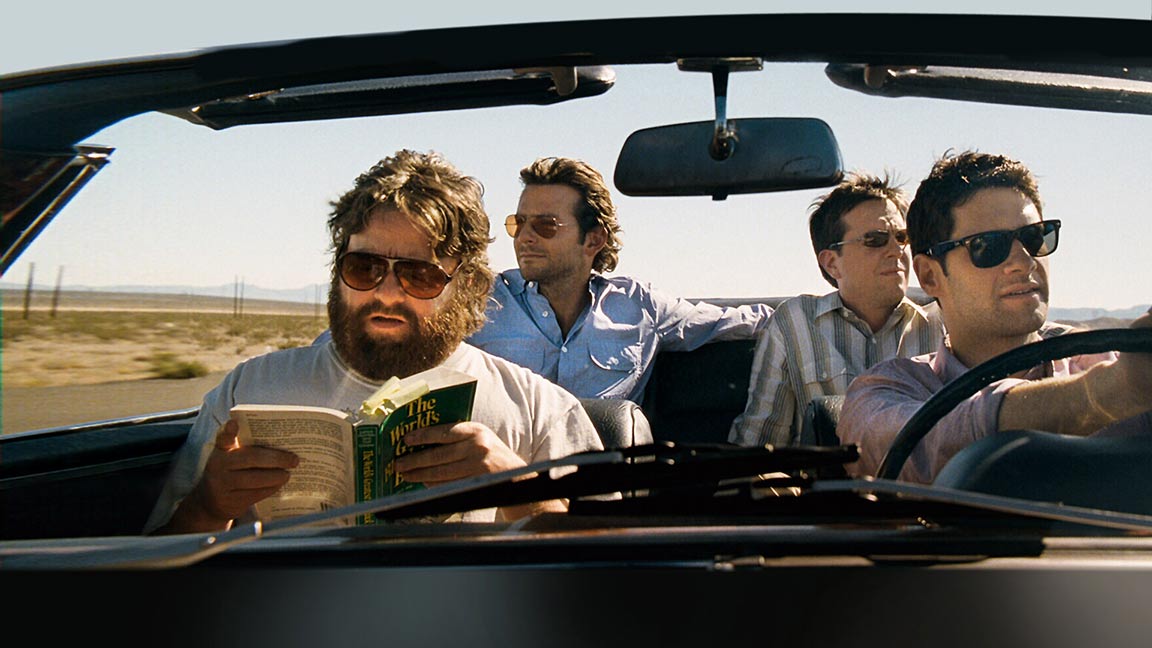 The Hangover is one of the funniest R-rated comedies ever. The trailer here tells the basic premise very well; Doug is getting married, and of course, every groom needs a bachelor party. So Doug sets off to Vegas with his three friends, Stu, Alan, and Phil.

All goes well, until the three friends wake up in a trashed hotel room with no recollection of what happened the night before...and no groom. As the trailer also suggests, the rest of the movie pretty much revolves around the trio trying to piece together the events of the evening before, and find Doug before his wedding begins.

There's chickens, tigers, a random baby, a stripper, and Mike Tyson all thrown in for good measure, and the gags come thick and fast. Most of these are from Zach Galifianakis as Alan, and he is a total moron, but in the best possible way.