The trailer for The Box.

Norma and Arthur Lewis are a suburban couple with a young child who receive an anonymous gift bearing fatal and irrevocable consequences. A simple wooden box, it promises to deliver its owner $1 million with the press of a button. However, pressing this button will simultaneously cause the death of another human being somewhere in the world...someone they don't know. With just 24 hours to have the box in their possession, Norma and Arthur find themselves in the crosshairs of a startling moral dilemma and face the true nature of their humanity.

Director Richard Kelly initially dismissed the idea of filming a period piece digitally (The Box is set in 1976). After seeing David Fincher’s film Zodiac in 2007, he realized it could be done.

The Box received mostly mixed reviews upon release. Roger Ebert gave the film 3 out of 4 stars, and it holds 45% fresh rating on Rotten Tomatoes. Audiences were not as accepting of the film, earning an F on Cinemascore. 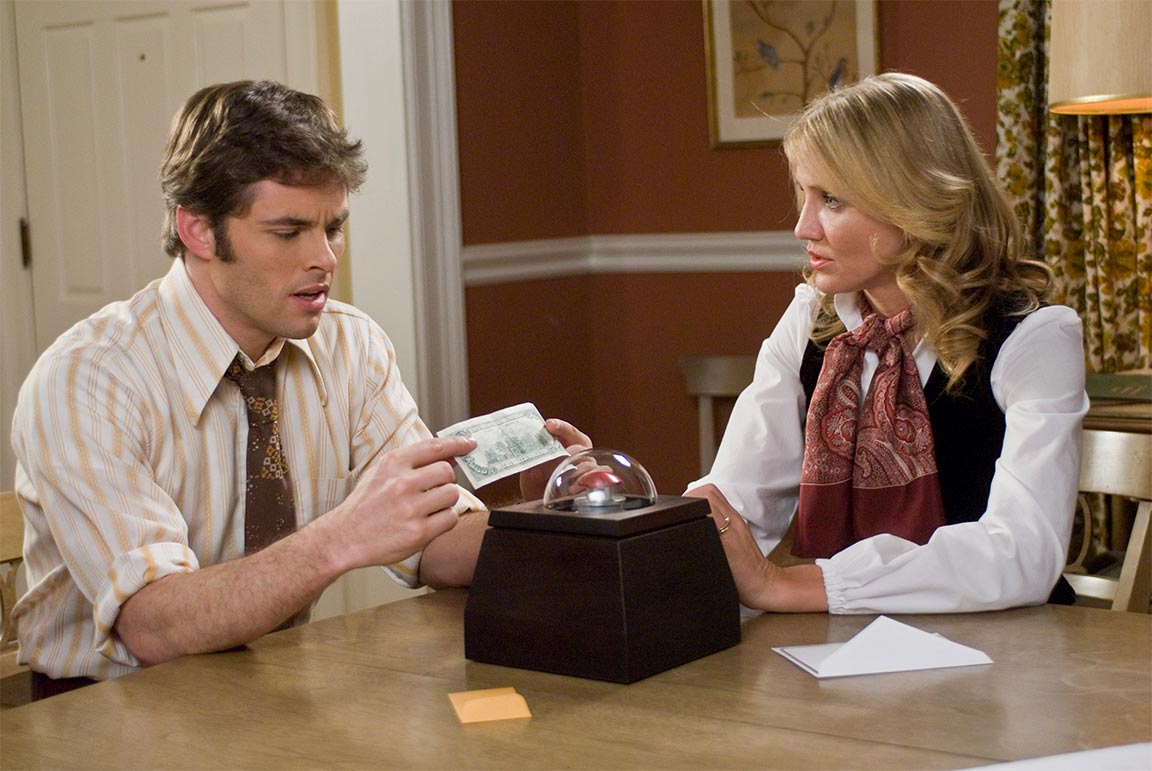 The Box is a film with an interesting premise. A couple who seem happy enough with their young son but struggling with financial issues. Conveniently, a strange man who is missing part of his face, in a creepy way, comes to their front door and presents them with a mysterious box which contains a button. If they hit the button, they will receive one million dollars which would really solve their financial woes.

The caveat being that if they hit the button, someone they do not know will die. The trailer presents this plot in an interesting and somewhat haunting way. Cameron Diaz and James Marsden are the couple who are in dire straits and feel like they have run out of choices. The two actors are always appealing and it is hard not to feel sympathetic to their plight and the ethical question the film asks is a doozy. The couple does not appear to take the man up on the offer, at least not immediately because they are more interested in the mysterious man and what his true motivations must be.

The trailer starts to get ever stranger, but it was written and directed by Richard Kelly, who also made the equally bizarre, Donnie Darko. No matter how many times I watch Donnie Darko , I am still not positive about what is happening, nor do I believe anyone else does, so it is safe to say that The Box could end equally confusing. The Box features mysterious goop, possibly dead people looking through windows and the threat of imminent death, making for a truly wacky little flick. However, if The Box is as entertaining and mind-looping as Donnie Darko, count me in.