When the kingdom's most wanted -- and most charming -- bandit, Flynn Rider (voice of Zachary Levi), hides out in a mysterious tower, he's taken hostage by Rapunzel (voice of Mandy Moore), a beautiful and feisty tower-bound teen with 70 feet of magical, golden hair. Flynn's curious captor, who's looking for her ticket out of the tower where she's been locked away for years, strikes a deal with the handsome thief and the unlikely duo set off on an action-packed escapade, complete with a super-cop horse, an over-protective chameleon and a gruff gang of pub thugs. Disney's Tangled is a story of adventure, heart, humour and hair -- lots of hair.

Disney decided to call the movie Tangled, instead of Rapunzel, in order to appeal to boys who might be put off by 'another princess movie.' They also marketed it as a comedy adventure film rather than a traditional fairy tale.

Idina Menzel and Kristen Bell both auditioned for the role of Rapunzel, which eventually went to Mandy Moore. The pair later went on to star in Frozen together.

Tangled is Disney's 50th animate feature, and also the most expensive to date, at $260 million.

Rapunzel's enormous amount of hair should weigh about 10.4lbs! 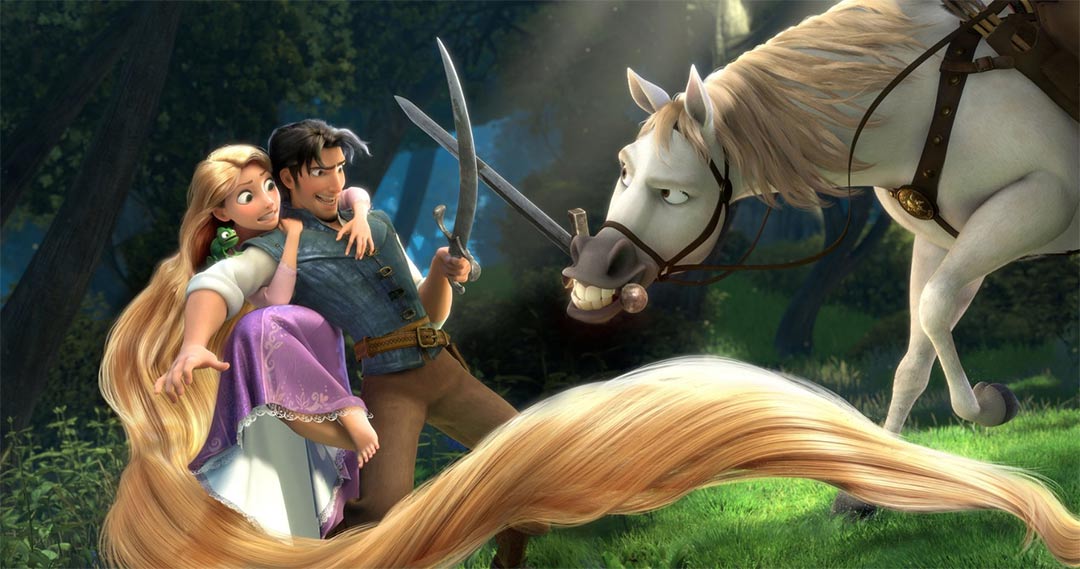 The story of Rapunzel is an old one, but Disney have put their own spin on it and brought it right up to date. Tangled tells the story of Rapunzel, who lives locked away in a high tower under the oppressive care of Mother Gothel. She is never allowed out, and often wonders what lies beyond the walls that imprison her. One day, a thief by the name of Eugene (voiced by Zachary Levi) manages to climb the tower walls, and the two then embark on an adventure together to clear his name and find out who Rapunzel really is.

The Tangled trailer is packed full of laughs, especially from Maximus, Eugene's horse. He's great. Rapunzel might be small, and naive, but she's fierce, and gives as good as she gets. She also appears to be entirely impervious to Eugene's charms, but this is Disney, so we can all pretty much guess where it'll end up.

Tangled is a great film, one that many believe to be Disney's best. That's not my opinion, but I do really love it. The animation, as you see from the trailer, is incredible, particularly the grass and Rapunzel's hair. The story unfolds well, and is funny, dramatic and tear-jerking, all in equal measure.

This trailer concentrates on Eugene (also masquerading in the film as Flynn Ryder), in an attempt to appeal to boys. Really though, there's no need. If a family watches this movie together, I guarantee everyone will enjoy it.  It's definitely a classic, and definitely one to watch more than once.