Sleeping With Other People Trailer (2015)

Trailer for Sleeping With Other People.

Can two serial cheaters get a second chance at love? After a one-night stand in college, New Yorkers Lainey (Alison Brie) and Jake (Jason Sudeikis) meet by chance twelve years later and discover they each have the same problem: because of their monogamy-challenged ways, neither can maintain a relationship. Determined to stay friends despite their mutual attraction, they make a pact to keep it platonic, a deal that proves easier said than done. Fresh, funny, and full of witty insights about modern love, this hilariously heartfelt film "is the rare rom-com that reminds us why we love them so much in the first place" (Time Out New York). Amanda Peet, Adam Scott, Natasha Lyonne, and Jason Mantzoukas co-star.

Sleeping With Other People proved so popular at the 2015 Sundance Film Festival that it was then played at Tribecca, where it sold out pre-sale tickets.

This is the second movie Alison Brie and Adam Brody have worked together on after Scream 4.
Kirsten Dunst was attached but had to drop out due to scheduling conflicts. 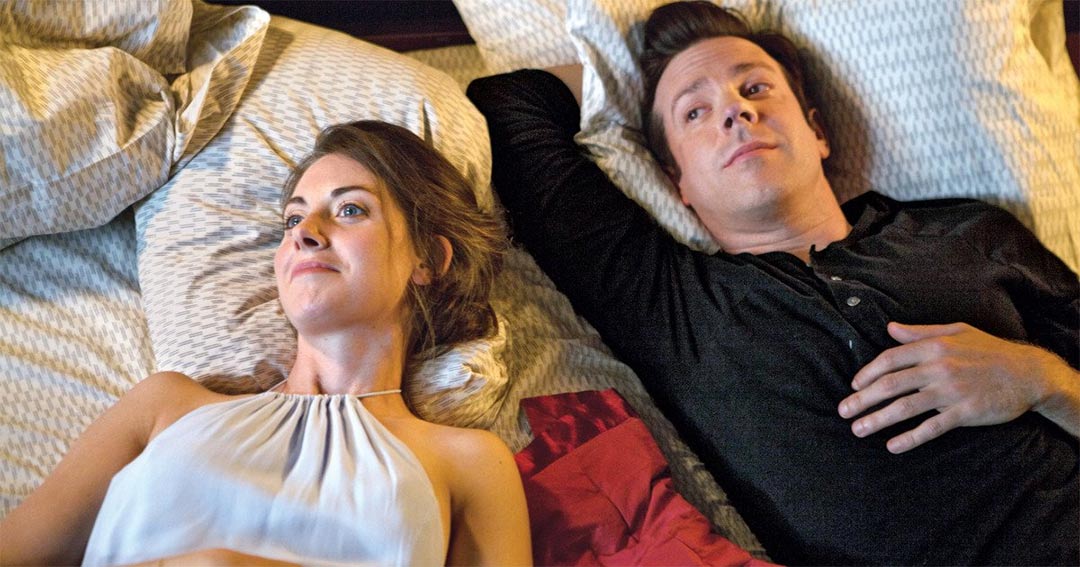 Sleeping With Other People centers on Jake, who finds it impossible to stay faithful in any relationship. It also, refreshingly, focuses on Lainey, who has just as much trouble maintaining monogamy. The two hooked up in college, and then they meet again at a sex addicts meeting, and decide to become friends even though they're ridiculously attracted to each other.

This movie is refreshingly honest; first of all, it's completely open about the pitfalls but also the perks of casual sex. It also doesn't differentiate between men and women, in that Jake isn't painted as a stud while Lainey is a slut. Let's face it; they're both adults and adults do have sex. It's a thing that happens.

Sleeping With Other People also examines the effect Jake and Lainey's actions have on others, but also on themselves. Though they clearly feel something for each other, both are too terrified that they'll cheat if they turn their friendship into a relationship, and so they decide not to pursue what could possibly be their one shot at happiness.

This is a movie which, although uproariously funny, has real depth. It makes you examine your own lifestyle and the relationships you hold with other people. It also, I think, serves as quite an empowering movie for women.

I'm going to keep coming back to it, because I think it's important. Lainey doesn't have her life together, but she doesn't need to be in a relationship to define who she is, or to feel valued. She sleeps around because she wants to, not for any other reason, and her enjoyment of sex is liberating to see played out on screen without any connotations attached. Sleeping With Other People has been a quiet success, but actually it really does deserve more.


Sleeping With Other People