The Princess and the Frog Trailer (2009)

Trailer for The Princess and the Frog, which will debut in theaters with the release of Up.

Walt Disney Animation Studios presents the musical"The Princess and the Frog, an animated comedy set in the great city of New Orleans. From the creators of The Little Mermaid and Aladdin comes a modern twist on a classic tale, featuring a beautiful girl named Tiana (Anika Noni Rose), a frog prince who desperately wants to be human again, and a fateful kiss that leads them both on a hilarious adventure through the mystical bayous of Louisiana.

This is the first of Disney's 2D films to use the same voice cast for both dialogue and singing, since Beauty and the Beast.

The Princess and the Frog is also the first Disney movie to feature an African-American Princess.

The alligator in the movie is called Louis after the late, great Jazz musician, Louis Armstrong.

Though the movie is set during the time of prohibition in the U.S., alcohol can still be seen being served freely both in Tiana's restaurant and at the ball. This is because in New Orleans, where The Princess and the Frog is set, prohibition was largely ignored. 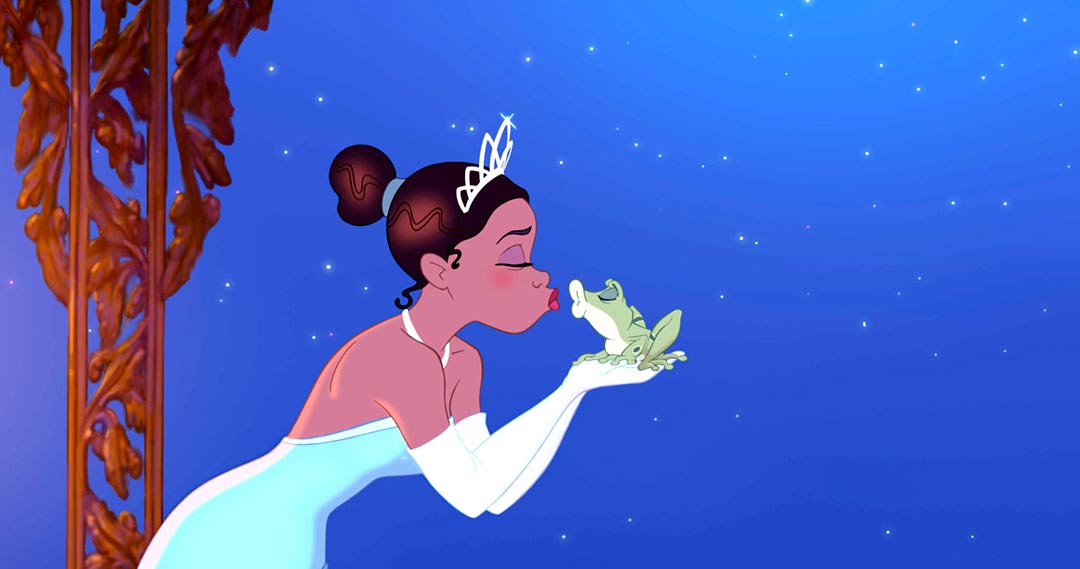 Most people are familiar with the traditional Frog Princess story. Now Disney bring their own take on it, starring Anika Noni Rose as Tiana, a hardworking, no-nonsense girl with a heart of gold.

Her life is turned upside down when Prince Naveen arrives. After being turned into a frog but the witch doctor Facilier, Naveen hopes that one kiss from Tiana will restore him to his former handsome self. Unfortunately, it doesn't, and Tiana finds herself transformed into a frog too.

The trailer gives us a pretty clear look at this movie, not least, the animation style which seems more like earlier Disney Classics. Indeed, The Princess and the Frog animation team took influence from both Bambi and The Lady and the Tramp when creating this.

Writer John Musker gives us the traditional tale but with plenty of added twists and turns, including lots of new characters to enjoy. We only get a glimpse at these in the trailer, because rightly so it focuses on the two main characters of Tiana and Prince Naveen, but be warned, this movie is dark, with a lot of focus on voodoo and black magic. The villain of the piece, Facilier, is not someone you'd like to meet on a dark night, and you certainly wouldn't want to make a deal with him, either.

The characters of Louis, the trumpet playing alligator, and Ray, the adorable firefly, are altogether much more pleasant characters though, and they really make this film come alive. Another huge plus for this movie is the songs, which are utterly inspired.

The Princess and the Frog is well worth a watch for all these reasons and more, and it's guaranteed to make you smile!