Collegiate a cappella group the Barden Bellas enter into an international competition that no American team has ever won.

The Green Bay Packers got the chance to appear in Pitch Perfect 2 after offensive lineman Dave Bakhtiari tweeted director Elizabeth Banks saying they all loved the first movie and would love to be in the sequel. The Packers do all their own singing, and didn't learn their choreography until the night before the shoot.

Anna Kendrick improvised more than half her lines.

Real a capella groups were used during filming, including Pentatonix and Penn Masala.
Rebel Wilson wanted Demi Lovato to appear in the movie but Lovato chose to put her recording and touring commitments first.

Ben Platt (Benji) was starring as Elder Cunningham in Book of Mormon on Broadway when filming was taking place, so he had to take time off to appear in Pitch Perfect 2. 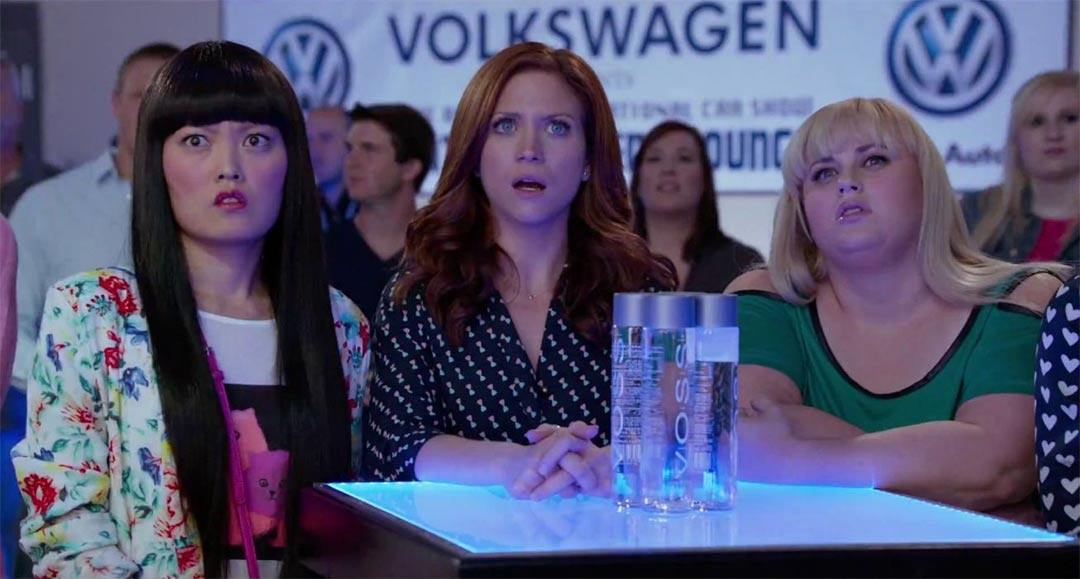 The Pitches are back! Following on from the huge success of Pitch Perfect, the Barden Bellas reunite one more, and this time it's on the world stage. The majority of the original cast return for the sequel, including Anna Kendrick, Brittany Snow, and Rebel Wilson and we pick up with the Bellas three years after the events of the first movie. Enjoying success, the Bellas become embroiled in "muff-gate" when Fat Amy's pants rip during a performance in front of Obama. The Bellas are subsequently banned from holding auditions and they find their reputation in tatters.

Undeterred, the Bellas decide to make a comeback and set out to win the world A Capella championships, which no U.S. team has ever won before. Of course, this gives scope for other characters to be introduced, and from this trailer it looks as though the Bellas' fiercest rivals come from Germany in the form of a group called "Das Sound Machine", and they also happen to be the current world champions.

It looks as though much of the film will be focused on the rivalry between the two groups and although the Barden Bellas are technically led by Beca Mitchell (Kendrick), and Chloe Beale (Snow), it's Fat Amy who is once again the center of attention.

This is all very well, if you like Rebel Wilson's work. I don't. I wouldn't mind so much if there was some variation to her roles but she is the same in each and every movie or trailer I see and I wish, just once, she'd throw us all a curve ball and show us what she can really do, because she has the talent to really wow.

Still, the trailer shows this movie to be great fun and filled with jokes and visual gags that will ensure audiences, especially fans of Pitch Perfect, love it. Just as well, really, since Pitch Perfect 3 will arrive in 2017.