Pirates of the Caribbean: On Stranger Tides Trailer (2011)

Trailer for Pirates of the Caribbean: On Stranger Tides.

"Pirates of the Caribbean: On Stranger Tides" captures the fun, adventure and humor that ignited the hit franchise --this time in Disney Digital 3D(TM). In this action-packed tale of truth, betrayal, youth and demise, Captain Jack Sparrow crosses paths with a woman from his past (Penelope Cruz), and he's not sure if it's love--or if she's a ruthless con artist who's using him to find the fabled Fountain of Youth. When she forces him aboard the Queen Anne's Revenge, the ship of the formidable pirate Blackbeard (Ian McShane), Jack finds himself on an unexpected adventure in which he doesn't know who to fear more: Blackbeard or the woman from his past.

Penelope Cruz was the only choice for the role of Angelica. She agreed to do the movie before she had even read the script, and was heavily pregnant throughout filming. Because of this, her sister, Monica Cruz, was used for the long-distance scenes, while Penelope only featured in close-ups.

Ian McShane plays the infamous pirate, Blackbeard, in the movie. The real-life Blackbeard really did have a ship called the Queen Anne's Revenge, which Blackbeard stole from the French Navy and renamed.

During filming in the U.K., Johnny Depp turned up at a local school in full Jack Sparrow costume and make-up, after receiving a letter from a 9-year-old girl.

Pirates of the Caribbean: On Stranger Tides is the fourth installment in the Pirates franchise. As with all the other Pirates movies, it contains a reference to the Disneyland Pirates of the  Caribbean ride that the films are based on: At one point, the camera flashes to the skeleton of the Ponce de Leon lying on a bed, surrounded by treasure. This same scene is featured in the ride. 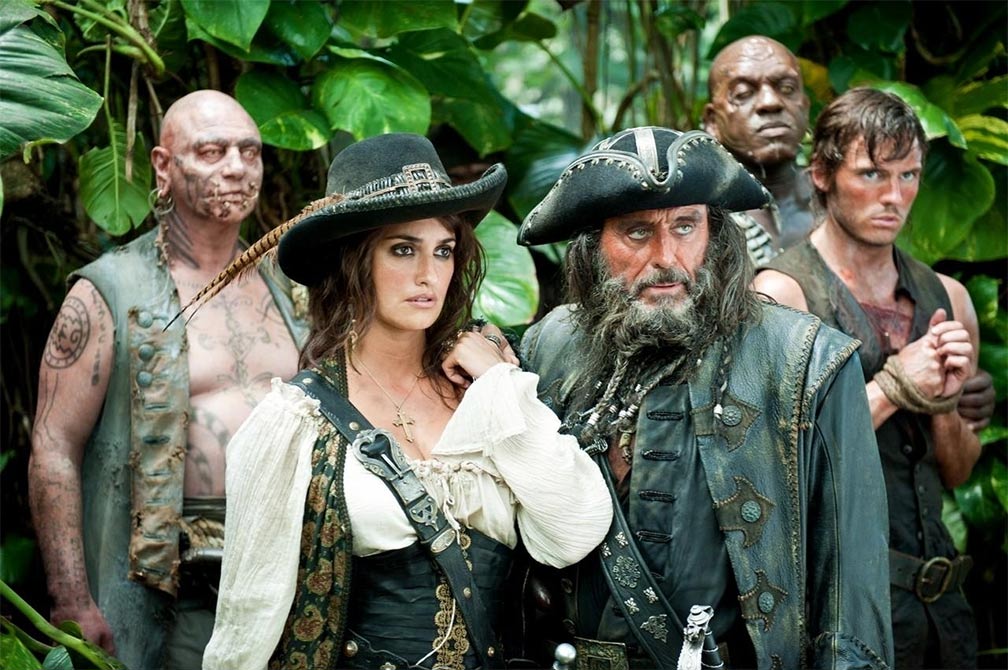 Let's be honest here, the first Pirates movie, The Curse of the Black Pearl, will probably always be the best. For a start, we didn't know what to expect, and Johnny Depp's Jack Sparrow came totally out of left field. He delivered a character who is completely insane, with brilliant comic timing, and real heart.

Because we then knew what was to come in subsequent Pirates films, some of the shine was taken away, and we were reliant on the plot to keep us interested in the film. All credit to the writers of On Stranger Tides, who have once again delivered a proper pirate story.

This time, Jack Sparrow and Barbossa (the magnificent Geoffrey Rush), are on a quest to find the fountain of youth. As well as trying to beat Blackbeard to win the quest, along the way Sparrow and his crew encounter mermaids, zombies and of course, more pirates. We also get to meet Jack's dad, played by Keith Richards, whom Depp famously based Jack Sparrow on.

On Stranger Tides might not be the greatest film of all time, but it will still be a fun adventure nonetheless, and an enjoyable couple of hours spent at the movies.