An adaptation of the beloved 1938 children's book, which won the 1939 Newbery Award. Mr. Popper is a house painter whose dreams of Arctic exploration prompt him to write letters to real explorers. One of them sends him a penguin, which he keeps in the icebox. Before he knows it, the painter has a litter of 12 beaked birds. They eat voraciously, leading him to form Popper's Performing Penguins, a stage act that goes on tour and creates mayhem at every stop.

The main reason Jim Carrey wanted this role, was the chance to dance with Penguins like his hero, Dick Van Dyke did in Mary Poppins.

Mr. Popper's Penguins was made seventy three years after the novel on which it was based, was published.

Real penguins were used for a lot of the shots and the film was shot on a refrigerated set.

Each of the six penguins are named after elements of their personality; e.g Lovey is so called because he cuddles a lot, Stinky is named after his flatulence, Loudy is the noisiest.

In the novel, Mr. Popper forms a vaudeville act; Mr. Popper's Performing Penguins. This was considered to be included in the movie but ultimately not used. 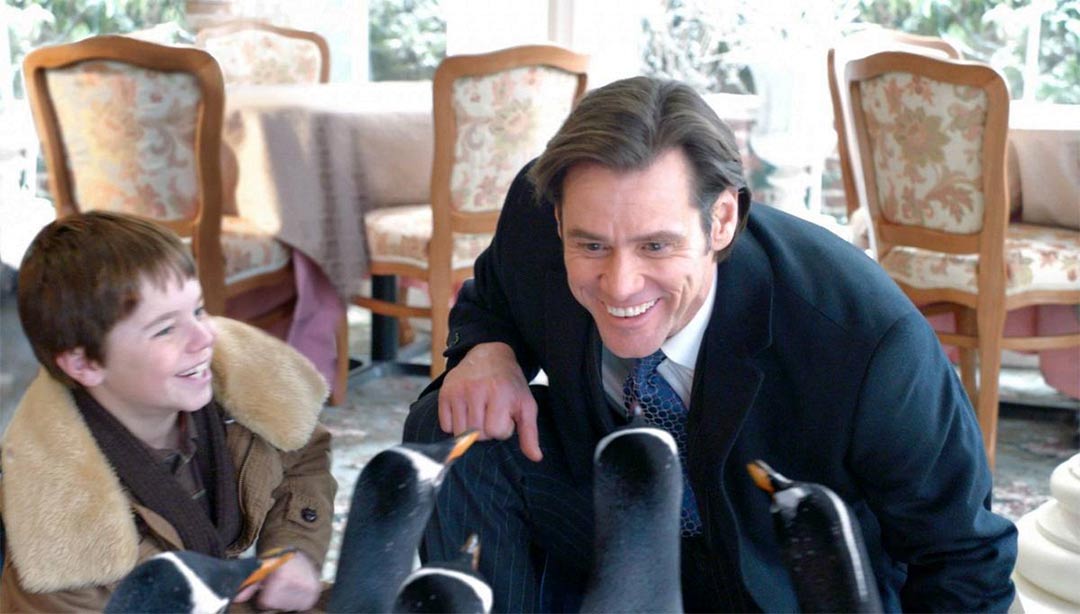 Jim Carrey takes on the role of Mr. Popper in an adaptation of the 1938 children's book of the same name. The story has been updated somewhat, and turned into something a little bit more dramatic in order to suit the big screen.

This time, Mr. Popper is a reluctant penguin owner (like there could ever be such a thing), and he's also a hard businessman. When six penguins move in, his whole life is turned completely upside down and his work colleagues and friends begin to doubt his sanity.

Personally, I'd be beyond thrilled if six penguins wanted to move in with me. I'll be willing to bet they wouldn't cause as much disruption as one human baby would, you've just got to turn the heat down.
As you might have guessed, from the trailer or just from the fact that this is a family movie, Mr. Popper does come around to his feathered, fish-eating friends, even going as far as to train them how to dance.

I love Jim Carrey when he's in movies like this that have a real heart as well as humor. I love penguins. I love this film. It's one for the whole family to enjoy, with plenty of super cute moments as well as a few moments where you might have to surreptitiously wipe away the tears.