Dave Ming Chang (Eddie Murphy), newly arrived in New York City, may be the ultimate fish out of water. There’s something about him that’s not quite right – for starters, he seems remarkably out of place and uncomfortable in his own body. And for good reason: “Dave” is not a man at all, but a ship made in the image of its miniature-sized captain. It’s Eddie Murphy in Eddie Murphy in Meet Dave.

The film co-writer, Bill Corbett originally pitched the idea as a web series to SciFi.com Corbett was a longtime writer for Mystery Science Theater 3000 another Sci-Fi network series.

Meet Dave was a commercial failure. With a $60 million budget, it earned just over $50 million worldwide with only $11 million of that made domestically. 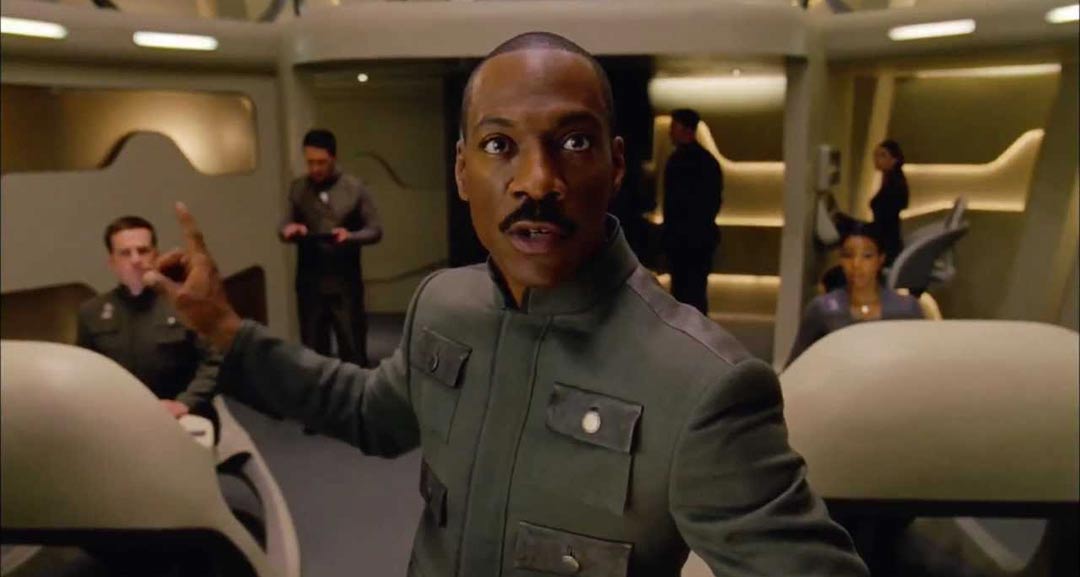 Meet Dave does not seem like a real movie, it seems like a weird dream after a night of too many spicy tacos and margaritas that may have been laced with something. The film’s premise is, let me get this straight, about tiny people inside the brain of a robot the shape and size of Eddie Murphy, who are controlling the robot’s movements, speech, and behavior. One of the tiny people is also Eddie Murphy, but I am not quite sure of the significance of the robot having the same appearance as one of the people inside of it. Elizabeth Banks seems to accept the robot person as a real person because apparently her character is either desperate for companionship or unaware of normal human interaction. Gabrielle Union appears to be the love interest of the tiny Eddie Murphy.

Seems kind of unfair for poor Elizabeth Banks to waste so much time on a robot, I don’t know how they are going to soften the blow of that discovery but there is nothing in the trailer for Meet Dave that makes me want to know or care about what happens.

The entire trailer is filled with so much nonsense that there is no reasonable explanation to why this was ever made. Eddie Murphy has had a really rough career in the 21st century and it may be due to his awful choices, Norbit (2007), The Adventures of Pluto Nash (2002) for example. It is as if he sabotaging himself. Whatever Eddie Murphy is doing it just does not work, Meet Dave is an absolutely ridiculous premise with no sign or expectation that the film will be anything better than the weak trailer.