Twenty-two years after the events of Jurassic Park (1993), Isla Nublar now features a fully functioning dinosaur theme park, Jurassic World, as originally envisioned by John Hammond. After 10 years of operation and visitor rates declining, in order to fulfill a corporate mandate, a new attraction is created to re-spark visitor's interest, which backfires horribly.

In the movie, the Jurassic World theme park contains a statue of the character, John Hammond, played by Sir Richard Attenborough in Jurassic Park and The Lost World. He wanted to make another appearance in the franchise but his health was too poor. He then passed away in 2014. His death was written into the Jurassic World script, and the statue put in place specifically to honor Attenborough.

Indominous Rex, the name given to the dinosaur hybrid created in the film, means fierce, untamed king in Latin, suiting the creations murderous and destructive nature.

The Triumph motorbike used in filming was gifted to Chris Pratt by the company when filming wrapped. 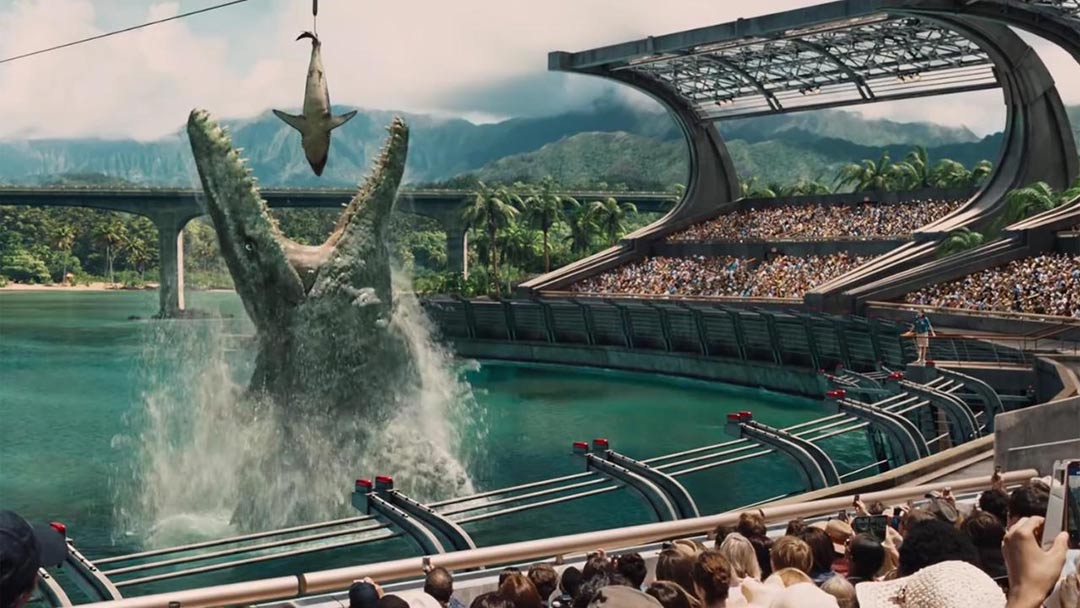 The first few notes of that familiar music begin and that's all I need to be transported back to my childhood, when Jurassic Park was one of the most awesome movies I had ever seen. In fact, I still feel that way. While there might be flaws, the very idea of scientists cloning dinosaurs and opening an attraction for the public to see them is just magical to me.

After Jurassic Park, subsequent sequels seemed to lose their way a little, to me, but I'm happy to say Jurassic World seems to be a return to form. Advancements in technology over the 22 years since Jurassic Park was released mean that director Colin Trevorrow has the scope to make the dinosaurs bigger, better, and more intimidating than ever before. It also gives him the chance to incorporate new species into the movie, such as the Mosasaurs, the marine reptile we see in this trailer.

Of course, the undoubted star is the Indominous Rex, which we catch glimpses of in the trailer. Specially cloned in order to attract more visitors to the park, the Rex is a deadly hybrid with far more intelligence than anyone realized. It is her ability to escape which throws the park, and its visitors into peril.

Okay, so in that respect, Jurassic World maybe replicates Jurassic Park, but who really cares? All the Jurassic movies appeal to the side of me that loves to geek out over dinosaurs and imagine the possibility of this ever becoming a reality and I'll happily watch them all again and again.