Hot Tub Time Machine follows a group of best friends who've become bored with their adult lives: Adam (John Cusack) has been dumped by his girlfriend; Lou (Rob Corddry) is a party guy who can't find the party; Nick's (Craig Robinson) wife controls his every move; and video game-obsessed Jacob (Clark Duke) won't leave his basement. After a crazy night of drinking in a ski resort hot tub, the men wake up, heads' pounding, in the year 1986. This is their chance to kick some past and change their futures – one will find a new love life, one will learn to stand up for himself with the ladies, one will find his mojo, and one will make sure he still exists!

John Cusack has said in interviews that he decided to join the cast almost entirely just because of the title, Hot Tub Time Machine.

After the guys are transported back to the 80s, a series of images and videos are seen on a television that keys the group into the fact that they’ve been transported back in time. One of those images is a shot of Chevy Chase in the music video for Paul Simon’s “You Can Call Me Al”. Chase also appears in the film as the repairman who makes the time travel possibly.

While the guys are on the mountain, a man skis past talking on an 80s era cell phone. The man asks whoever’s on the other end, “Where’s my $2?”, a reference to the 1985 movie Better Off Dead, also starring John Cusack. 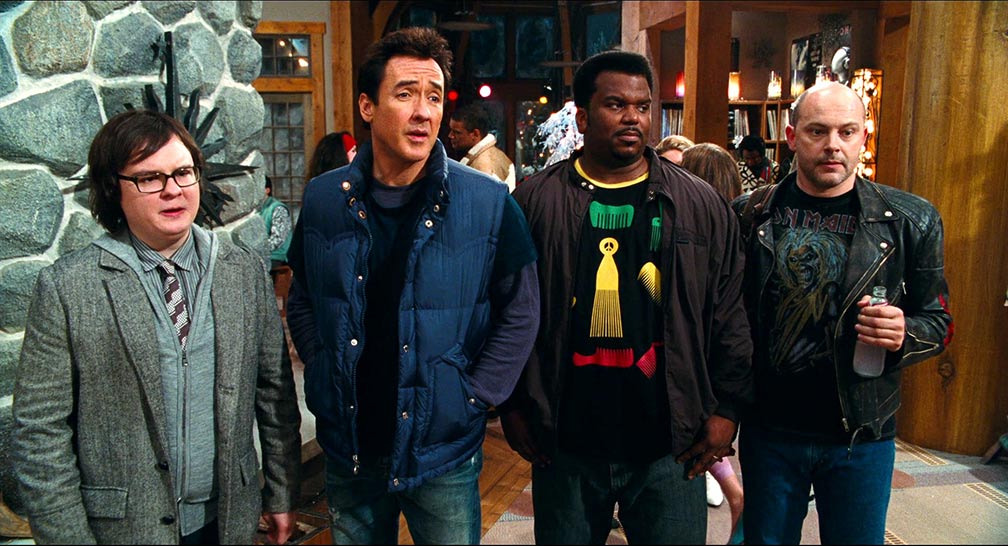 The title alone is a certain kind of genius. Hot Tub Time Machine. It’s such a simple title, but it tells you everything you need to know about the movie. There is a hot tub and it is apparently a time machine. Hijinks ensue.

The trailer sets up the trip as some middle aged friends trying to regain a shred of their youth, trying to relive old times. Then the hot tub time machine messes it all up by actually sending them back to relive old times. Duke looks to play a kid of one of the group, making him even more out of place in the past and possibly threatening his very existence!

The Hot Tub Time Machine trailer really lets John Cusack, Rob Corddry, Craig Robinson, and Clark Duke show off their comedy chops. Each and everyone one of them is capable of delivering great one liners and improving hilarious lines, a couple of which no doubt made it into this trailer. Particularly funny are Robinson’s lines of “What color is Michael Jackson,” as a way to see which decade they’re in, and his deadpan, “It must be some kind of hot tub time machine” as he looks right at the camera.

Hot Tub Time Machine has real potential. Will it receive a bunch of prestigious awards? Almost certainly not. Will it be a fun movie that will get some good laughs? Almost definitely.