A new CG animated feature film from 20th Century Fox Animation, the makers of the “Ice Age” films, based on the beloved book, first published in 1954, by Ted Geisel, who wrote under the pen name Dr. Seuss. Seuss books are among the defining works of family literature, have sold over 200 million copies, and have been translated into fifteen languages. The “Horton” series (“Horton Hears a Who,” “Horton Hatches the Egg”) are consistently among the top-selling of all Seuss titles – generation after generation. Horton Hears a Who is about an imaginative elephant who hears a cry for help coming from a tiny speck of dust floating through the air. Suspecting there may be life on that speck and despite a surrounding community which thinks he has lost his mind, Horton is determined to help.

This is Jim Carrey's second movie based on a Dr. Seuss story; the first was How The Grinch Stole Christmas. Both movies feature Who's.

When the snow falls in Whoville, the children make a Grinch snowman.

Another reference to a popular Dr. Seuss book; a Who can be seen holding a plate of green eggs and ham in the crowd scene at the end of the film.

There is also a Who that looks a lot like The Cat in the Hat seen in the movie, but his hat is blue and yellow instead of red and white. 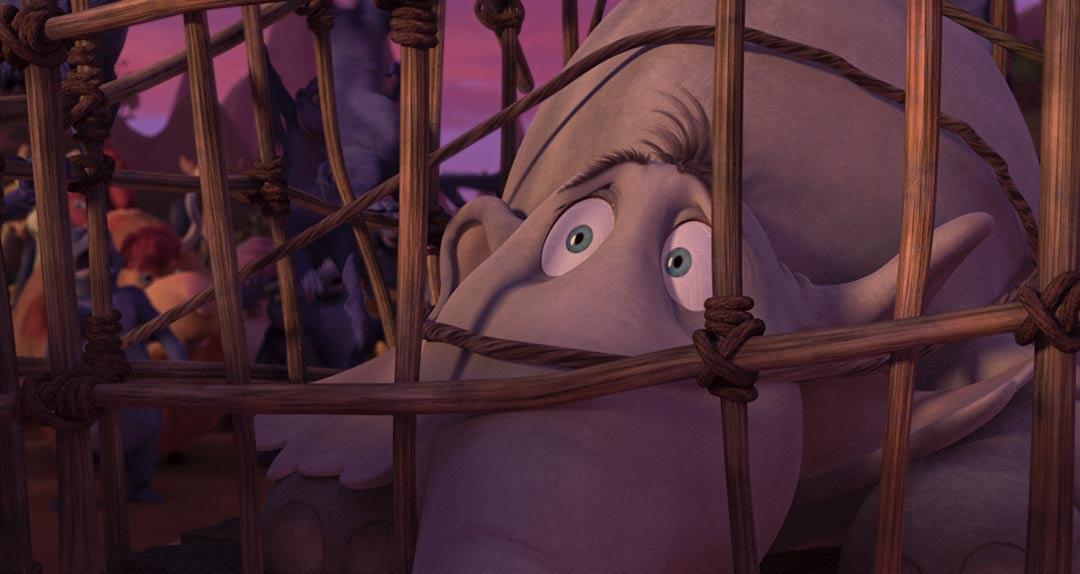 Dr. Seuss books are all so wonderfully magical and imaginative that it's truly a wonder that each and every one of them haven't been made into movies. However, a lot have...and what's also truly a wonder, and also quite sad, is that they've not done nearly as well as they deserve to.

It's not even that they're bad, just that they haven't been successful in recapturing the magic that Seuss's books create. The Cat in the Hat film was off the wall and too crazy, in my opinion, but The Grinch was good, and so was The Lorax.... and now we have Horton Hears A Who.

The story is adorable; Horton is an elephant who thinks he spies a community living on a speck of dust- and indeed, it is a community of Whos, who all need Horton's help to stay safe. Seuss's creation of the Whos is perhaps one of his best achievements; their distinctive look and way of talking lends itself perfectly to an animated feature and that is definitely a big plus for this trailer; the animation looks great.
I also love the nods to other works by Seuss, and this movie is littered with literary references, which is great. However, it's really a move for the very young, and I'm talking age up to 7. Now, that's not a bad thing... Seuss wrote for young kids and they need to have movies they can enjoy...it's just that I wanted a Seuss movie that works on multiple levels and which made adults and kids alike laugh and cry. The Grinch achieved it, but The Cat in the Hat went too madcap and dark to appeal to the very young.
That said, Horton Hears A Who is, as you can tell from the trailer, sweet and charming and if you're a Seuss fan, as I am, it's definitely worth taking a look.


Horton Hears a Who!