Grown Ups is a comedy about five friends and former teammates who reunite years later to honor the passing of their childhood basketball coach. With their wives (Salma Hayek, Maria Bello, Maya Rudolph) and kids in tow, they spend the Fourth of July holiday weekend together at the lake house where they celebrated their championship years earlier. Picking up where they left off, they discover why growing older doesn't mean growing up.

Grown Ups was originally going to be made in the 1990s with Sandler and his famous friends. Chris Farley was supposed to be in the film as well but after his death in 1997, the character is now played by Kevin James.

After the movie premiered, Adam Sandler gifted his friends/co-stars (Chis Rock, Kevin James, Rob Schneider, and David Spade) each a new Maserati as a thank you.

Adam Sandler’s real-life wife and daughters make an appearance in the film. They play the wife and children of the character Tardio (Richie Minervini). 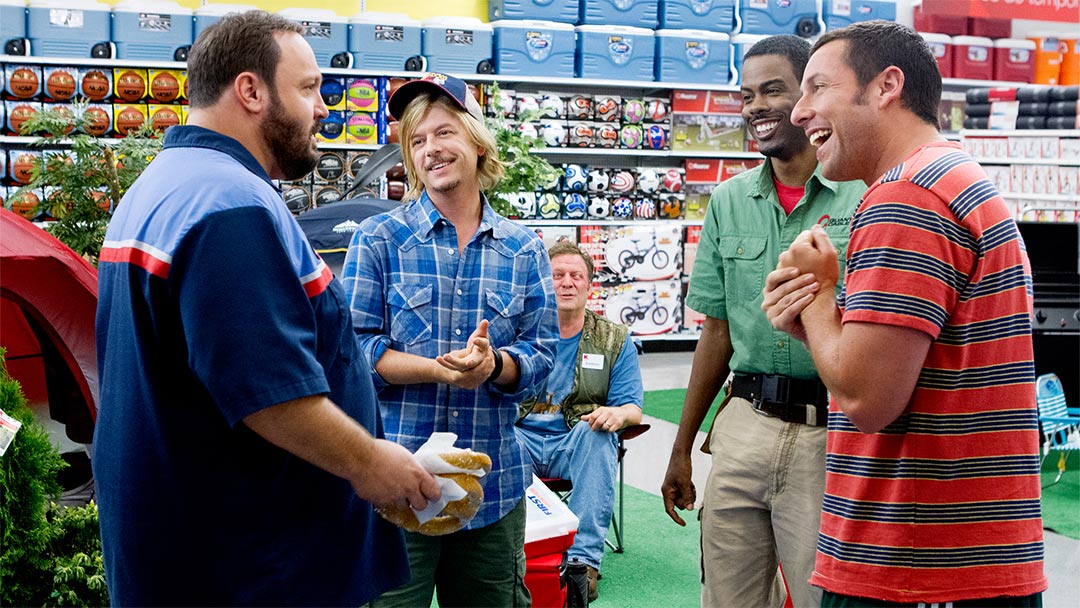 The feature trailer for Grown Ups begs the question, when did Adam Sandler become friends with Kevin James and why does he insist on putting him in his movies? After two decades I can accept Rob Schneider popping up in his movies because he too is a Saturday Night Live alum and has earned his place but not James.

The trailer is filled with plenty of sight gags and played-out jokes like people falling from deadly heights, and peeing in the pool. There is a moment when Schneider’s character kisses his wife who is older than him much to the disgust of his friends. Although the age difference is substantial, it feels like one of those Hollywood double standards where no one cares when a young woman is married to some old dude but the opposite is only played for cheap laughs.

Salma Hayek plays Sandler’s wife because Sandler is a huge star and put the whole flick together so of course someone as gorgeous and likeable as Hayek would deal with such ridiculousness. The rest of the cast is also nice to see. Chris Rock is always hilarious and David Spade has his own brand of smarmy charm.

Grown Ups feels like a broad comedy version of Ocean's Eleven (2001) in the way that a bunch of super famous friends get together and have a blast together while filming it with only a secondary thought to whether the audiences will like it. If Oceans Eleven is any indicator, Grown Ups in spite of all of its stupid jokes and easy gags may use its heart and cast chemistry to pull it off.