Gone Girl -- directed by David Fincher and based upon the global bestseller by Gillian Flynn – unearths the secrets at the heart of a modern marriage. On the occasion of his fifth wedding anniversary, Nick Dunne (Ben Affleck) reports that his beautiful wife, Amy (Rosamund Pike), has gone missing. Under pressure from the police and a growing media frenzy, Nick’s portrait of a blissful union begins to crumble. Soon his lies, deceits and strange behavior have everyone asking the same dark question: Did Nick Dunne kill his wife?

Ben Affleck's weight fluctuates during the course of the movie; he was cast in Batman V Supermanwhile filming Gone Girl, and started to get buff for his portrayal of Bruce Wayne.

Reese Witherspoon bought the film rights to Gone Girl from author Gillian Flynn, and produced it under her Pacific Standard productions banner. She also intended on playing the role of Amy, but after an initial meeting wih director David Fincher, she said she realized she wasn't right for the role.

Fincher cast 35 year old Rosamund Pike instead, because he said she could play any age range. He also said that her being an only child brought something to the role of Amy.

Gone Girl is the first time Ben Affleck has done a full frontal nudity scene. He agreed to do it because Fincher said he wanted the movie to be a realistic 'warts and all' film. 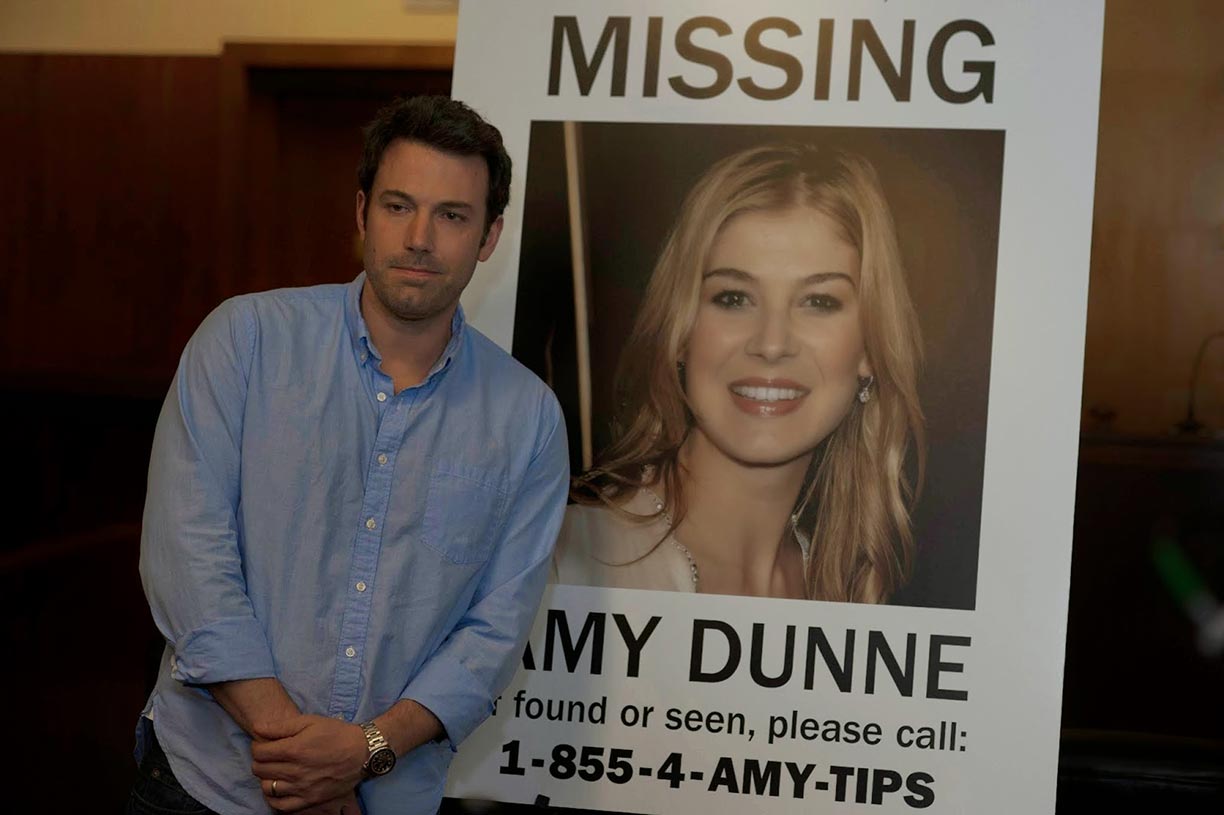 Gone Girl was initially a successful novel before being picked up by David Fincher and made into what has become his biggest movie ever. When Nick Dunne reports his wife missing on their fifth wedding anniversary, people's sympathy soon gives way to doubt and suspicion as the web of lies he has woven crumbles to reveal a marriage in crisis.

This trailer is chilling. The music- "She", performed here by Richard Butler, takes on a whole new meaning as things evolve and what we think is a man lovingly devoted to his wife, turns into something more sinister.

The question is, did Nick kill his wife? Well, I guess we have to watch the movie to find our answer to that one, but this trailer raises a lot of questions of its own. Why does Nick seem to leave the bathroom in a way that leaves Amy no doubt that he is constantly watching her? Why does Amy speak to Nick in such a harsh manner, leading to him lashing out at her? Why does Nick pursue a public search, and one in which he is deeply involved, if he killed her? Surely he'd be better to take a back seat, or would that arouse too much suspicion?

The performances in this movie are sublime, and it's wonderful to see Affleck back on form because he is a real talent. Pike is completely entrancing as Amy and really owns the movie. Gone Girl will stay with you long after the credits have rolled.