Ghosts of Girlfriends Past Trailer (2009)

Trailer for Ghosts of Girlfriends Past.

Celebrity photographer Connor Mead loves freedom, fun and women...in that order. A committed bachelor who thinks nothing of breaking up with multiple women on a conference call, Connor's mockery of romance proves a real buzz-kill for his kid brother, Paul, and a houseful of well wishers on the eve of Paul's wedding. Just when it looks like Connor may single-handedly ruin the wedding, he is visited by the ghosts of his former jilted girlfriends, who take him on a revealing and hilarious odyssey through his failed relationships--past, present and future. Together they attempt to find out what turned Connor into such an insensitive jerk and whether there is still hope for him to find true love...or if he really is the lost cause everyone thinks he is.

No doubt due to the strong resemblance, Christa B. Allen plays the teenage version of Jenny (Jennifer Garner). Allen also played a young Garner in the film 13 Going on 30 .

The film was originally going to star Ben Affleck with Kevin Smith to direct. Due to the failure of Gigli, the studio decided against Affleck starring in the film. Years later, when the film went back into development, it starred Affleck's wife Jennifer Garner and his co-star from Dazed and Confused, Matthew McConaughey.

The film was a critical failure but did well at the box office. Ghosts of Girlfriends Past earned over $52 million domestically, and over $102 million worldwide. 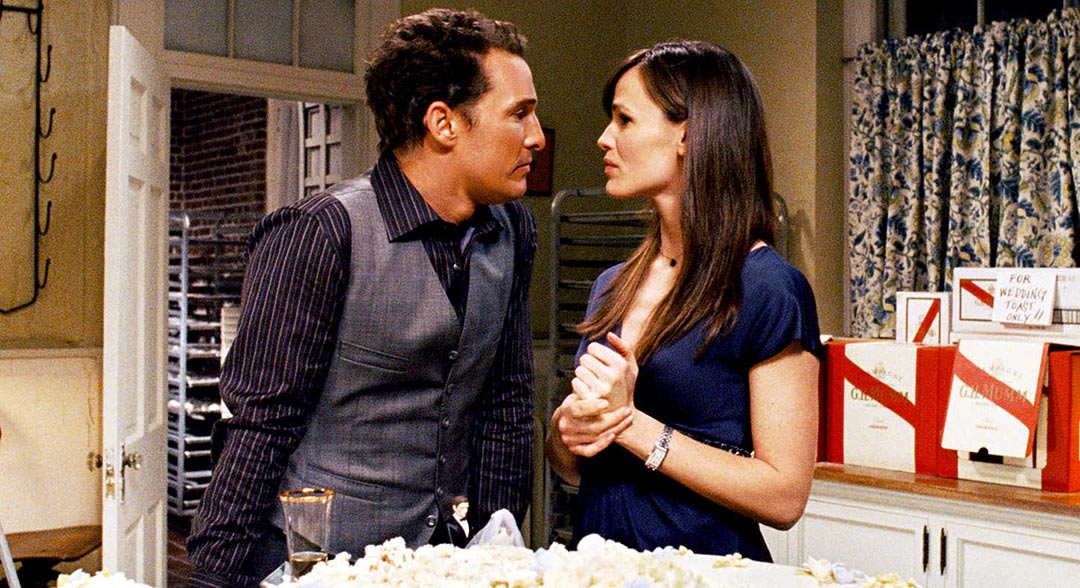 The trailer for Ghosts of Girlfriends Past gave me a similar opinion to how I feel about Matthew McConaughey, which is that he borders on sweet, charming, likable, and incredibly played-out and terrible. McConaughey plays a womanizer who is shown the error of his ways by getting the Ebenezer Scrooge treatment. While attending a wedding, he runs into an old girlfriend played by Jennifer Garner. What is it with movies like this and the characters saying the other person’s first and last name? “Connor Mead”, “Jenny Perotti”, they exclaim to each other even though they used to be in a relationship and it is an awkward reunion. In real life, people mostly just say “Hey”, or even give a nod, but not in a McConaughey movie. Maybe he needs to be reminded of his character's name. After seeing the person who is probably the love of his life, he is visited by ghosts of girlfriends past, hey that’s the title!

Emma Stone is his high school girlfriend and the best part of the trailer. Her braces, frizzy hair, and acid wash go with her goofy personality so perfectly. The rest of the trailer is unsurprising to anyone who knows The Christmas Carol or has seen a romantic comedy. There is even a scene of the wedding cake getting ruined, it is a comedy paint-by-numbers, but that is just fine. For those who can stomach the same old, same old McConaughey shtick , Ghosts of Girlfriends Past is probably a sweet movie, for me, the trailer did not show me anything new or anything I am clamoring to see.