In the all-new action comedy Get Smart, Maxwell Smart (Steve Carell) is on a mission to thwart the latest plot for world domination by the evil crime syndicate known as KAOS. When the headquarters of U.S. spy agency Control is attacked and the identities of its agents compromised, the Chief (Alan Arkin) has no choice but to promote his ever-eager analyst Maxwell Smart, who has always dreamt of working in the field alongside stalwart superstar Agent 23 (Dwayne "The Rock" Johnson). Smart is partnered instead with the only other agent whose identity has not been compromised: the lovely-but-lethal veteran Agent 99 (Anne Hathaway). As Smart and 99 get closer to unraveling KAOS' master plan — and each other — they discover that key KAOS operative Siegfried (Terence Stamp) and his sidekick Shtarker (Kenneth Davitian) are scheming to cash in with their network of terror. Given little field experience and even less time, Smart — armed with nothing but a few spy-tech gadgets and his unbridled enthusiasm — must defeat KAOS if he is to save the day. Inspired by the classic television series, the film also stars Masi Oka (TV's "Heroes") and Nate Torrence (TV's "Studio 60 on the Sunset Strip") as Control's crackerjack analysts Bruce and Lloyd; David Koechner ("Anchorman: The Legend of Ron Burgundy") as Agent Larabee; and Terry Crews (TV's "Everybody Hates Chris") as Agent 91.

Get Smart was in development to be a movie for many years. In 1998, Jim Carrey was originally attached to play the role of Maxwell Smart. More recently, Will Ferrell was briefly cast in the lead before Carell finally took over.

James Caan plays the president in the Get Smart film. He also was in two episodes of the original television series from the 1960s. The episodes were a two-part episode entitled, “To Sir, With Love”.

The role of Agent 99 was a coveted one. Jessica Biel, Jessica Alba, and Jennifer Love Hewitt were just a few of the young actresses up for the role that eventually went to Anne Hathaway. 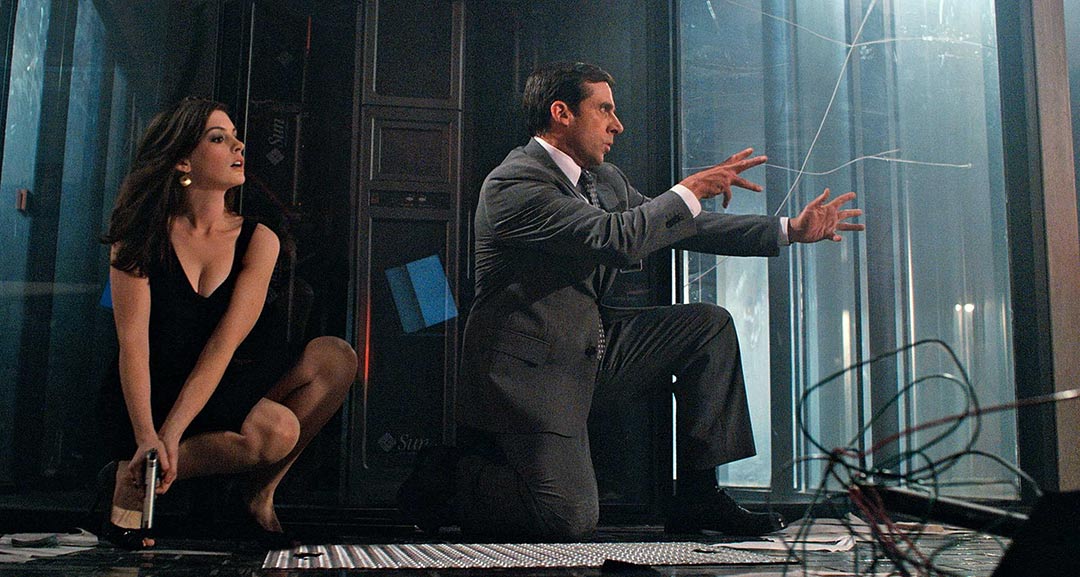 Just as Steve Carell proved to be the best thing about the 2005 film Bewitched by playing Uncle Arthur perfectly, he returns to capturing the spirit of a memorable character of a 1960’s sitcom with his role as Maxwell Smart. I am going to say it, there is no one I could imagine playing a better modern Maxwell Smart.

Anne Hathaway is also expertly cast as Agent 99 as she must be the more sensible agent who also happens to be gorgeous. The use of the cone of silence is a great touch for fans of the original, but the trailer includes plenty of fun for those who missed the original series. The spy agency Control is attacked by the criminals known appropriately as KAOS, so it is up to Maxwell Smart and Agent 99 to stop them. Even the names KAOS and Control are hilarious in their simplicity, they could just call them the Good Guys and the Bad Guys. The Rock, er, Dwayne Johnson is the tough guy who has to deal with a bunch of knuckleheads who do not look like they know what they’re doing, but they do. Alan Arkin is as hilarious as ever as the Chief.

The trailer has plenty of comedy and action and most of the action is comedic. The trailer for Get Smart has it all; great actors, comedy, action, and a bit of nostalgia for fans of the original.