Oscar®-winning director Ron Howard brings to the screen writer Peter Morgan's electrifying battle between Richard Nixon, the disgraced president with a legacy to save, and David Frost, a jet-setting television personality with a name to make, in the untold story of the historic encounter that changed both: Frost/Nixon. Reprising their roles from Morgan's stageplay are Frank Langella, who won a Tony for his portrayal of Nixon, and Michael Sheen, who fully inhabited the part of Frost onstage in London and New York.

For three years after being forced from office, Nixon remained silent. But in summer 1977, the steely, cunning former commander-in-chief agreed to sit for one all-inclusive interview to confront the questions of his time in office and the Watergate scandal that ended his presidency. Nixon surprised everyone in selecting Frost as his televised confessor, intending to easily outfox the breezy British showman and secure a place in the hearts and minds of Americans.

Likewise, Frost's team harbored doubts about their boss' ability to hold his own. But as cameras rolled, a charged battle of wits resulted. Would Nixon evade questions of his role in one of the nation's greatest disgraces? Or would Frost confound critics and bravely demand accountability from the man who'd built a career out of stonewalling? Over the course of their encounter, each man would reveal his own insecurities, ego and reserves of dignity--ultimately setting aside posturing in a stunning display of unvarnished truth.

Frost/Nixon not only re-creates the on-air interview, but the weeks of around-the-world, behind-the-scenes maneuvering between the two men and their camps as negotiations were struck, deals were made and secrets revealed...all leading to the moment when they would sit facing one another in the court of public opinion.

Frost/Nixon is a collaboration between Imagine Entertainment and Working Title Films, with Academy Award® winners Brian Grazer and Ron Howard joining Tim Bevan and Eric Fellner as producers. Joining Langella and Sheen as the colorful real-life personalities who provide the men counsel is a formidable roster of actors including Kevin Bacon, Oliver Platt, Sam Rockwell, Toby Jones and Matthew Macfadyen.

During the filming of Frost/ Nixon, the actors remained in character throughout, bickering and taking sides when the cameras weren't rolling. The crew even addressed Frank Langella as Mr. President.

Director Ron Howard only agreed to direct the film if the same actors (Michael Sheen and Frank Langella) could reprise their roles of David Frost and President Nixon from the stage show.
Howard faced strong competition to direct the movie from Martin Scorcese, George Clooney, Sam Mendes, and Bennett Miller.

Ron Howard subsequently admitted to voting for Nixon in the 1972 election. 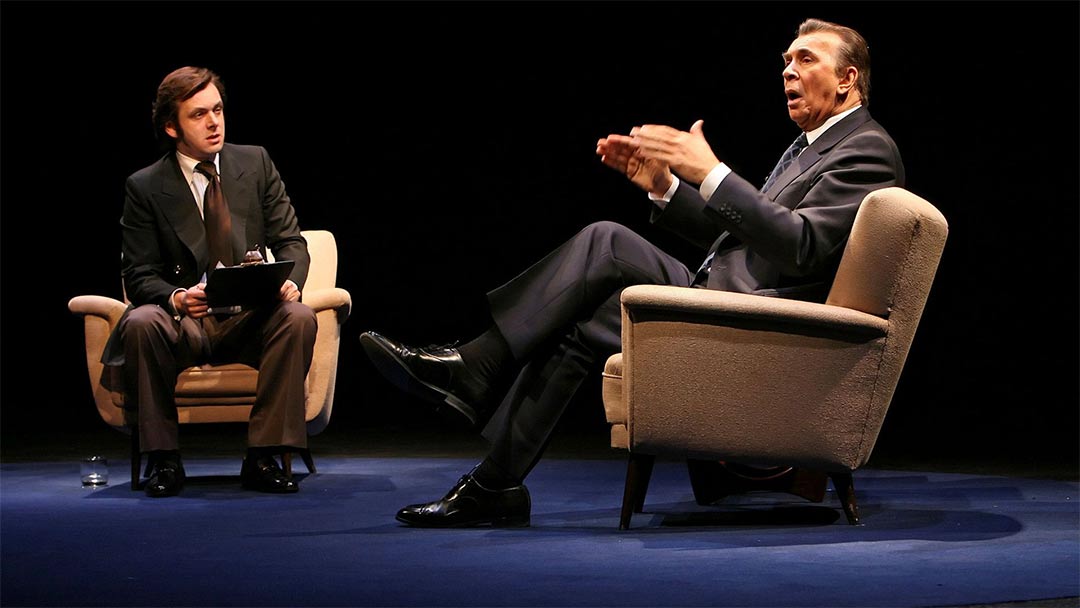 Being a Brit, I am perhaps somewhat ignorant of the history of American politics. While I am aware that the Watergate scandal happened, and that it resulted in Nixon's resignation, I am not entirely clear on the facts that led up to his departure or what happened in the aftermath. Hey, it was well before I was born!

I am, however aware of the existence of the play, Frost/ Nixon, for which Frank Langella won a Tony for his portrayal of the former President. I did not know there was a film version though, but now I do, and now I need to watch it.

The trailer for Frost/ Nixon has really grabbed me, because although Michael Sheen looks nothing like David Frost, the talk show host and former comedian he is playing, he embodies him so perfectly that I find myself staring in amazement every time he appears on screen.

Not only that, but Frank Langella does look like Nixon, and sounds just like him too. He also puts across exactly the image I have always held of Nixon; and arrogant, rude man who always assumed he hadn't done anything wrong.

I love the idea of the war behind the scenes leading up to this monumental interview. I love the American's naive assumption that Frost wouldn't be able to handle Nixon in an interview and that they somehow thought Nixon could exonerate himself by talking to Frost.

We Brits love an underdog, especially one of our own, and so of course I am really enjoying Frost's quiet determination to have his say and to make Nixon squirm. In fact, I enjoyed the interactions between Sheen and Langella so much in this trailer, that I barely noticed Kevin Bacon on my screen. Now that's saying something. This movie looks great, and I can't wait to see more of it.