Teaser trailer for Disaster Movie gives a small compilation of clips from the film with no suggestion of story. The teaser spoofs Enchanted, Hancock, The Incredible Hulk and Iron Man.

Disaster Movie marks the acting debut of Kim Kardashian. Surprisingly, this was not her last acting job, and she has earned roles in television and film.

Disaster Movie holds a 1.9 rating on IMDB. It occupied the very bottom of IMDB's movies for four months after the film’s release. It was only bumped from the bottom spot by an obscure Paris Hilton movie called Sweetie Pie. Currently, the rating for Disaster Movie is lower than Sweetie Pie.

As a way to ensure the jokes would seem current, many of the spoofs in Disaster Movie were written into the script before some of the movies spoofed were even released. 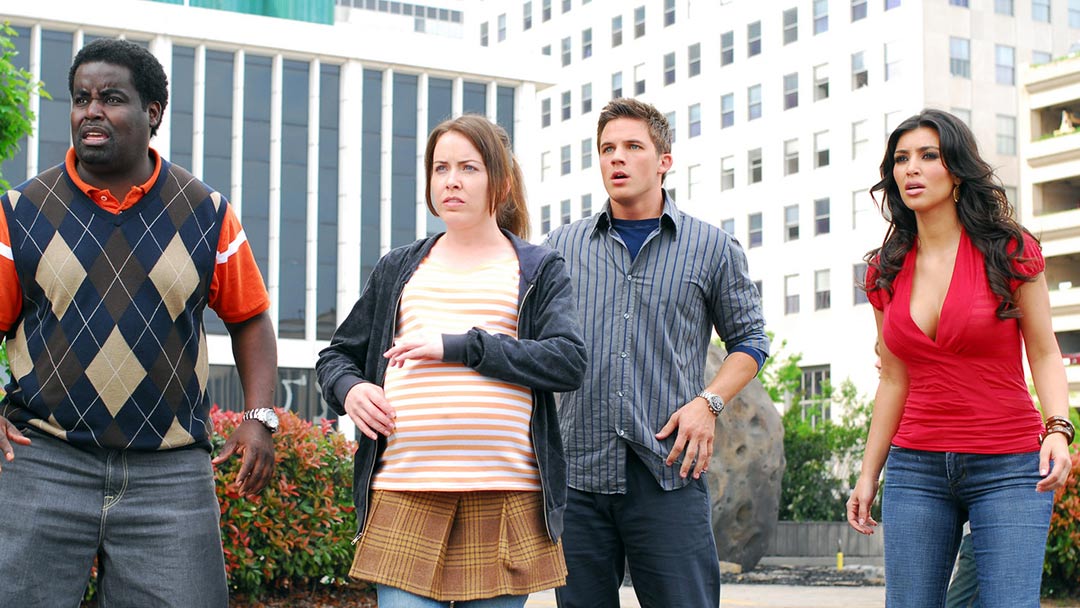 Why even name such a terrible movie, Disaster Movie? Is it so the power is taken away from everyone who wants to criticize how awful it is. There have been so many spoof movies made and in the right hands, can be done well but Disaster Movie is clearly not in the right hands of anyone. The fact that the trailer opens with “From the guys who watched way too many movies”, proves just how this pile of junk is not remotely credible from the beginning.

The cast includes Kim Kardashian, Vanessa Minnillo, and Carmen Electra who are not exactly known as being fine thespians but are probably just dumb enough that the producers talked them into being in the movie. The jokes are all over the place too, with superhero and disaster movies being mocked only to have Sex and the City, Juno and Enchanted thrown in too? Why? Hannah Montana being squashed by a boulder while still promoting her latest album is just another random scene that just feels like the filmmakers have a beef with Miley Cyrus and this is their way to deal with it. It really is the only reasonable explanation for such an unnecessary and unfunny scene. After every introduction of a fake movie character, the character just gets hit by something or falls. This is what they are using for comedy?

Even the Three Stooges had decent word play in between their physical violence toward each other. Seriously, Disaster Movie may actually be the worst trailer there is and with that may be the worst spoof movie there has been. The entire trailer feels like a few untalented thirteen-year-olds grabbed one of their parent’s digital cameras and goofed on some movies for 90 minutes.