Trailer for Despicable Me.

In a happy suburban neighborhood surrounded by white picket fences with flowering rose bushes, sits a black house with a dead lawn. Unbeknownst to the neighbors, hidden beneath this home is a vast secret hideout. Surrounded by a small army of minions, we discover Gru (voiced by Steve Carell), planning the biggest heist in the history of the world. He is going to steal the moon (Yes, the moon!) in Universal's new 3-D CGI feature, Despicable Me.

Gru delights in all things wicked. Armed with his arsenal of shrink rays, freeze rays, and battle-ready vehicles for land and air, he vanquishes all who stand in his way. Until the day he encounters the immense will of three little orphaned girls who look at him and see something that no one else has ever seen: a potential Dad.

It might sound as though the Minions are speaking gibberish, but their language is actually called Minion-ese, and each sound translates to a real word.

The Minions are voiced by the directors, which is why they sound both French and English.

Gru's first name is given as Felonious.

When Gru enters the 'Bank of Evil', the words 'Formerly Lehman Brothers" can be seen over the door. 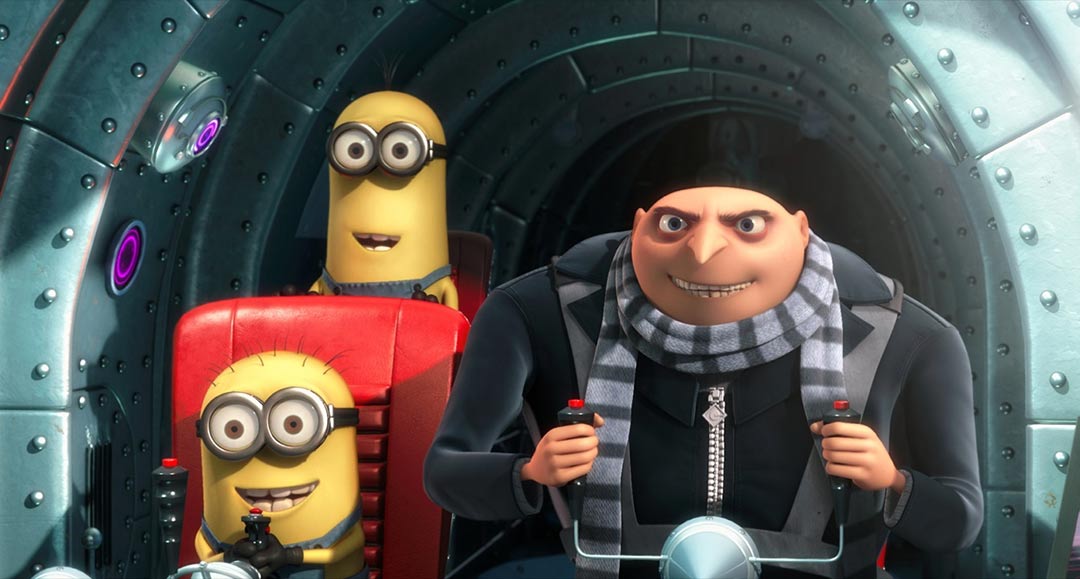 Illumination Entertainment might be small in comparison to Disney or Dreamworks, but Despicable Me is an outstanding effort at a really great animated feature. It's the first in a trilogy of movies, though the third movie, Minions, focuses only on the small yellow servants and not on Gru and his family.

For now, Despicable Me introduces us to Gru, an evil mastermind, and the Minions, his servants who live to do his evil bidding. While working on yet another criminal plot, he uses three orphaned girls as part of his scheme, but slowly theitr love and adoration of him turns him around and changes his whole outlook on life.

As trailers go, this one certainly doesn't do the film justice. That said, it is a really good short little film all in itself, with a fun twist, so enjoy it- just don't expect the film to follow those featured! Perhaps the biggest thing missing from this trailer, apart from Gru, is the Minions. You know those lovable and yet insanely annoying little yellow creatures? Well, they started here, in Despicable Me, and steadily took over the universe just as their master, Gru, would want. He must be so proud.

Despicable Me is fun, and the sequels only get better and better. It's well worth watching because the humor provided by voices such as Steve Carell, Russell Brand, and Kristen Wiig, is brilliant. The film makers apparently wanted to hire voice artists with a history in improvisational comedy, and it really shows here. Their characters are well-rounded, well thought out, and it lifts the whole film.

The best part? After watching, you can move onto Despicable Me 2, which is even better!