Vince Vaughn, Jason Bateman, Jon Favreau, Malin Akerman, Kristin Davis, Kristen Bell and Faizon Love star in Universal Pictures’ upcoming comedy Couples Retreat. Based on an original idea of Vaughn’s, the comedy follows four Midwestern couples who embark on a journey to a tropical island resort. While one of the couples is there to work on their marriage, the other three set out to jet ski, spa and enjoy some fun in the sun. They soon discover that participation in the resort’s couples therapy is not optional. Suddenly, their group-rate vacation comes at a price. What follows is a hilarious look at real world problems faced by all couples. The film also stars Kali Hawk and Jean Reno.

Controversy arose when the UK version of the Couples Retreat movie poster was altered by having actors Faizon Love and Kali Hawk removed. Universal claimed it was not because they were black actors but because they were less recognizable to audiences. Universal Apologized and changed plans to do the same alterations for other countries.

Although the film was a complete critical failure, Couples Retreat was a box-office success. The film earned $171.8 million with a budget of $60 million. The film was directed by Peter Billingsley. Billingsley has become long time friends with co-writers/actors Vince Vaughn and Jon Favreau. Billingsley played Ralphie in the Christmas classic, A Christmas Story. 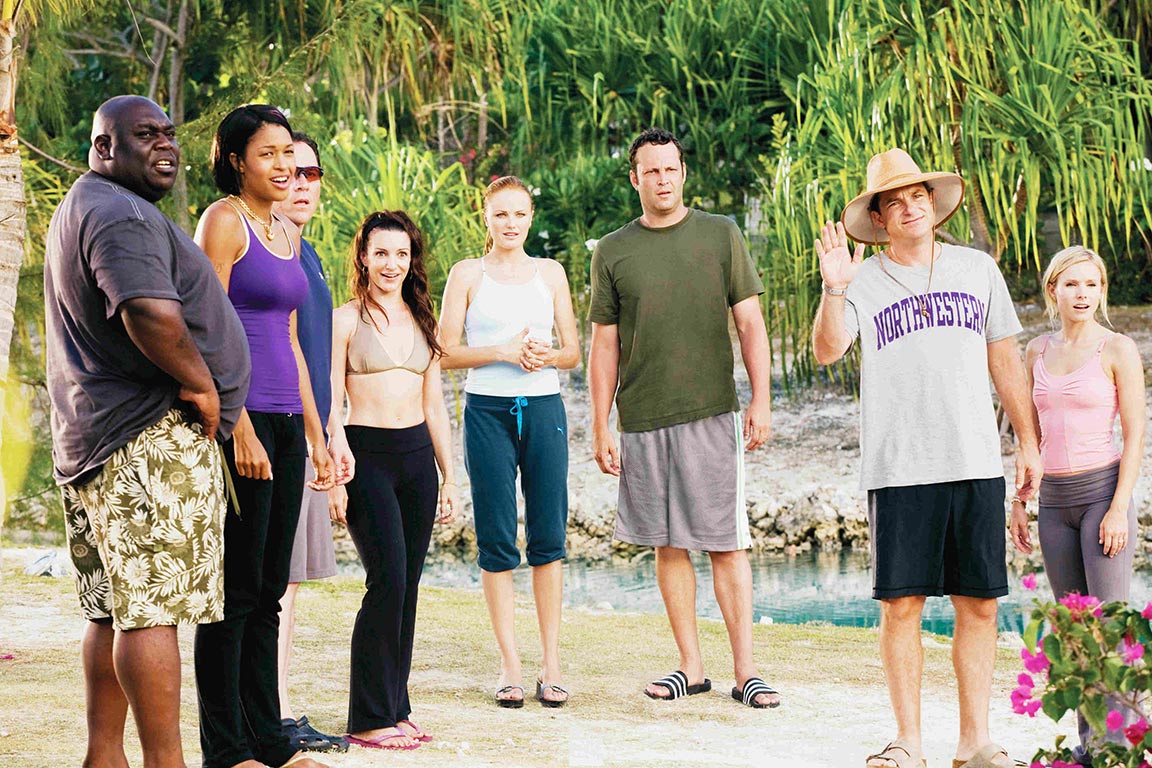 The trailer for Couples Retreat is nothing revolutionary and there are not many laughs, but there sure are a lot of big name actors that may be enough to entice most people to watch. Jason Bateman and Kristin Bell are two adorable people who are struggling with their marriage. They decide to go to a resort to fix their relationship rather than stick to therapy. Since it is funnier to bring along some of their friends who are also having a tough time in their marriages, they do just that.

Jon Favreau and Kristin Davis are a terrible couple who seem to just cheat on each other. Faizon Love is dating a much younger woman (Kali Hawk), so there is little chance those two will last. Finally, it seems Vince Vaughn and Malin Akerman may actually be the only well-adjusted couple of the group. Although, that is not saying much. The couples go to a beautiful island with plenty of scenery to make such an unpleasant plot more appealing. Along with the lovely geographical sights, there are plenty of enticements like a muscly man with a nonspecific accent. What is it with movies that include the same generic olive complexioned man with long hair, a nice body, and confusing accent? It is always a different actor but they somehow use the same spray-on tan and dialect coach.

The trailer goes on to show that the couples go through wacky activities required by the resort as a way to bring the couples closer together, even though clearly no couple should stay together by the end of the film because they are all disasters. This is one of those disappointing trailers, where the actors are all so terrific that I wish the plot and dialogue lived up to the performers in perfect well-balanced harmony, but all I see is irreconcilable differences.