Confessions of a Shopaholic Trailer (2009)

The trailer for Confessions of a Shopaholic.

Rebecca Bloomwood is a sweet and charming New York City girl who has a tiny, little problem that is rapidly turning into a big problem: she's hopelessly addicted to shopping and drowning in a sea of debt.

While Rebecca has dreams of working for a top fashion magazine, she can't quite get her foot in the door—that is, until she snags a job as an advice columnist for a new financial magazine published by the same company.

Overnight, her column becomes hugely popular, turning her into an overnight celebrity. But when her compulsive shopping and growing debt issues threaten to destroy her love life and derail her career, she struggles to keep it all from spiraling out of control.. and is ultimately forced to reevaluate what's really important in life.

Isla Fisher ("Wedding Crashers") stars in the film from producer Jerry Bruckheimer and director P.J. Hogan ("My Best Friend's Wedding"), based on the best-selling series of books by British author Sophie Kinsella.

Confessions of a Shopaholic is based on the Shopaholic series of novels by Sophie Kinsella. However, the  setting for the movie was changed from London to New York, in an effort to connect more with U.S. audiences.

Reese Witherspoon, Katie Holes, Amanda Seyfried and Anne Hathaway were all considered for the role of Rebecca Bloomwood, which eventually went to Isla Fisher. Witherspoon turned it down as she considered the character too close to Elle Woods from Legally Blonde.

Isla Fisher wore 5 inch stilettos for the duration of filming! 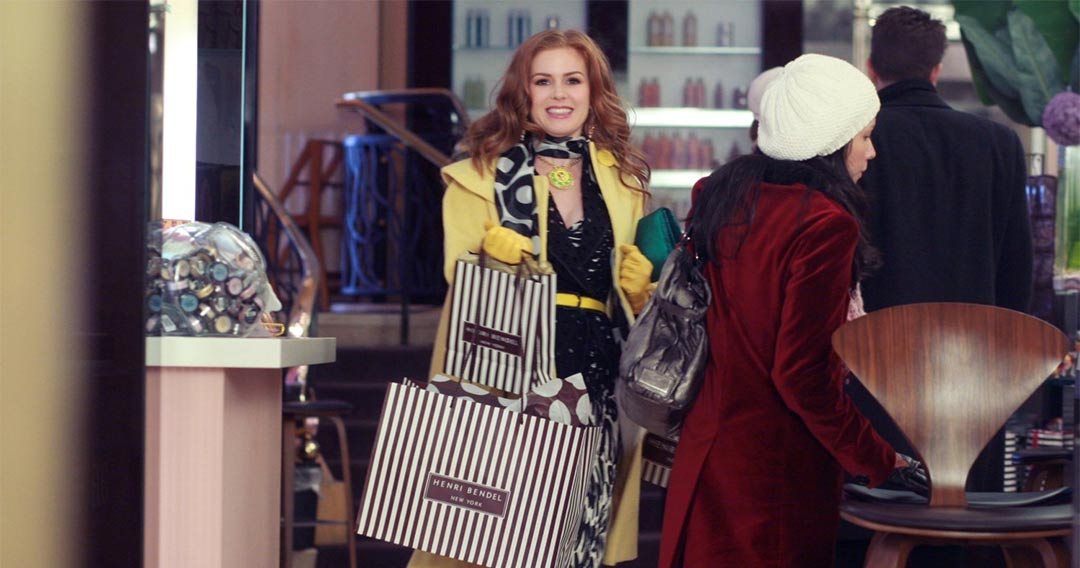 Fans of the Shopaholic novels will know how delightfully funny and enjoyable the stories are, and now we get to see Rebecca Bloomwood up on the big screen!

Rebecca loves to shop, and owns so many designer bags, shoes, and clothes that she hasn't got room for it all. But space is the least of her worries. Rebecca spends like there's no tomorrow but the trouble is, there is a tomorrow, and there's no income to cover her expenditure.

So Rebecca lands herself a job, with the help of a very creative resume, and sets about trying to become more responsible. It's just that Rebecca isn't too good at this whole 'adulting' thing, and there's always so many shoes to buy.

I'll be honest, the trailer highlights most of the funniest moments, and sometimes the movie is a little slow. It's not necessarily how I imagined the books either, mainly because they've made Rebecca a New Yorker instead of a London girl which I could have easily identified with, but that doesn't mean there's not a lot to like.

This movie is a classic 'chick flick.' It's cute, it will raise smiles, and some laughs too. You'll root for Rebecca despite her flaws and lack of money sense and you'll really, really want her to get the man. Confessions of a Shopaholic will leave you feeling warm and fuzzy and sometimes, that's all we want and need from a movie. Okay, so it's not deep and profound, it doesn't make you think, but it's a great film to watch with a group of girlfriends and a bottle (or three) of wine.