The Chronicles of Narnia: The Voyage of the Dawn Treader Trailer (2010)

The trailer for The Chronicles of Narnia: The Voyage of the Dawn Treader.

This time around – Edmund and Lucy Pevensie, along with their pesky cousin Eustace Scrubb – find themselves swallowed into a painting and on to a fantastic Narnian ship headed for the very edges of the world. Joining forces once again with their royal friend Prince Caspian and the warrior mouse Reepicheep, they are whisked away on a mysterious mission to the Lone Islands, and beyond. On this bewitching voyage that will test their hearts and spirits, the trio will face magical Dufflepuds, sinister slave traders, roaring dragons and enchanted merfolk. Only an entirely uncharted journey to Aslan’s Country – a voyage of destiny and transformation for each of those aboard the Dawn Treader – can save Narnia, and all the astonishing creatures in it, from an unfathomable fate.

The Voyage of the Dawn Treader is the first Chronicles of Narnia film to be distributed by 20th Century Fox. Since Prince Caspian didn't fare too well at the box office, Disney decided not to finance or produce this or any other Narnia installments.

When Susan writes from America, the picture of the four Pevensie children on her desk is actually a candid behind-the-scenes shot from Prince Caspian.

Reepicheep is voiced by Simon Pegg, replacing Eddie Izzard who voiced the mouse for Prince Caspian.
The drawings of the characters during the end credits are the same as from the Chronicles of Narnia books; this is a tribute to original illustrator, Pauline Baynes, who passed away in August 2008 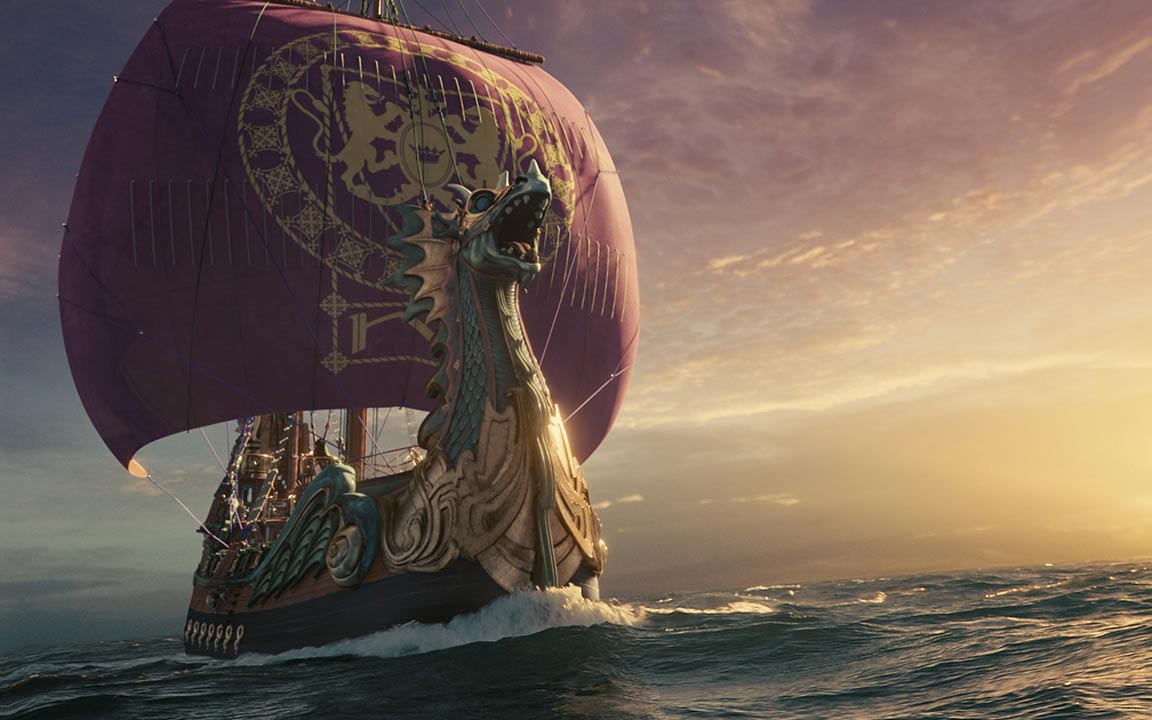 The first Chronicles of Narnia film, The Lion, The Witch and The Wardrobe, fared well at the box office, though it was not as big a smash as Disney would have hoped for. The second installment, Prince Caspian didn't really make too much of an impression and so Disney said farewell to the franchise and handed it over to 20th Century Fox.

Maybe that's why this trailer is lacking the magic and intrigue that made The Lion, The Witch and the Wardrobe so appealing. Maybe it's the fact that we know about Narnia now, and the first movie was an unknown? Or maybe it's just the fact that the franchise is growing tired now. Whatever it is, it's a shame, because the books lend themselves perfectly to film adaptations but from the looks of it, The Voyage of the Dawn Treader isn't all that great.

Ironically, it's my favorite book of all the Chronicles of Narnia, and it should be a real swashbuckling adventure; a daring trip across the high seas of a magical world...but the trailer just seems lackluster and honestly, only Lucy looks remotely pleased to be back.

This trailer needed more of Eustace's terrified surprise when he realizes the world he's been teasing his cousins about, is actually real. We needed to see exactly how obnoxious he is and we could also have had more of a hint that he learns his lesson the hard way. Instead, he's barely featured and the trailer instead has a mismatch of short snippets that don't amount to anything much, unfortunately.