Chernobyl Diaries is an original story from Oren Peli, who first terrified audiences with his groundbreaking thriller, Paranormal Activity. The film follows a group of six young tourists who, looking to go off the beaten path, hire an "extreme tour" guide. Ignoring warnings, he takes them into the city of Pripyat, the former home to the workers of the Chernobyl nuclear reactor, but a deserted town since the disaster more than 25 years ago. After a brief exploration of the abandoned city, however, the group soon finds themselves stranded, only to discover that they are not alone...

The film is often labeled as a “Found footage” film but that is not the case. It is actually filmed in a traditional way but the camerawork is poor quality and features a digital camera.

Chernobyl Diaries earned a modest $38 million worldwide but is considered a decent success considering the film’s budget was only $1 million.

This is Bradley Parker’s directorial debut. Most of his credits are in visual effects for films like Lake Placid and Fight Club. 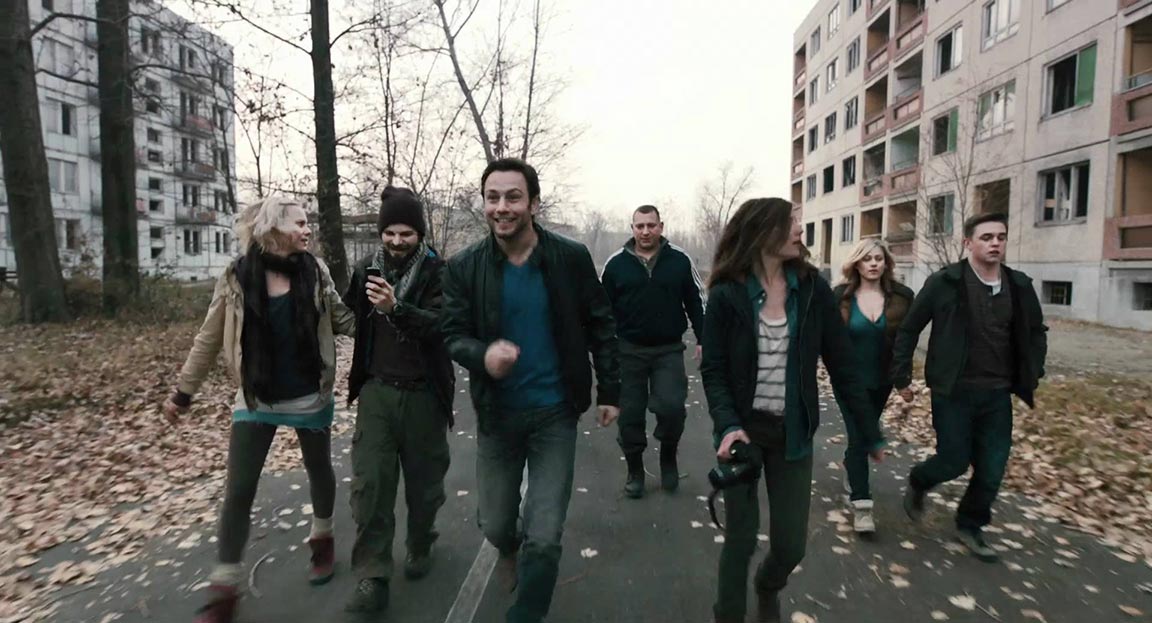 Once again, a group of young people who are feeling adventurous, go to a place they have no business going and it all ends in terror and horrific death. The trailer for Chernobyl Diaries is a nothing new in the horror genre, with possibly the exception of the film’s setting. A group of Americans decide that it would be neat to check out Chernobyl because the location of the worst nuclear explosion in history is their idea of a good time. They realize there is a chance that there could still be some radiation, but they are too dumb and carefree to worry about such practical problems. Some local guy takes them around and screws with them a little pretending to get sucked into water, and all is hilarious for them. It is all fun and games until some creepy ghost kids are popping up around them once it gets dark.

Why are they there after dark? Oh, because their van just doesn’t work. Of course. The rest of the trailer are scenes of these dummies running away, getting hunted, and generally being harassed by some angry spirits who are trapped in Chernobyl and are understandably a bit irritated by these unwelcome guests. I’m rooting for the radioactive ghosts.

The trailer for Chernobyl Diaries is fine but it also has the same basic plot as so many horror movies about a group of young people who want to stick their nose where it doesn’t belong and then are all shocked when they are hunted down and murdered one by one. The real problem with the Chernobyl Diaries trailer is that it is just not scary. If the trailer cannot provide a single jolt, then there is little hope for the entire film.