Jane Hayes is a seemingly normal young New Yorker, but she has a secret. Her obsession with Mr. Darcy, as played by Colin Firth in the BBC adaptation of "Pride & Prejudice," is ruining her love life: no real man can compare. But when a wealthy relative bequeaths her a trip to an English resort catering to Austen-crazed women, Jane's fantasies of meeting the perfect Regency-era gentleman suddenly become realer than she ever could have imagined.

Decked out in empire-waist gowns, Jane struggles to master Regency etiquette and flirts with gardeners and gentlemen—or maybe even, she suspects, with the actors who are playing them. It's all a game, Jane knows. And yet the longer she stays, the more her insecurities seem to fall away, and the more she wonders: Is she about to kick the Austen obsession for good, or could all her dreams actually culminate in a Mr. Darcy of her own?

Jennifer Coolidge had a hard time memorizing her lines or anything about the script. The producers of the film claimed the lines were made up on the spot moments before filming.

Some of the actors have previously worked in Jane Austen based productions. JJ Field played the romantic lead Mr. Tilney in Northanger Abbey, and Rupert Vansittart was in the BBC miniseries Pride and Prejudice which is the same version of Jane’s (Keri Russell) obsession. Keri Russell was pregnant during the filming of Austenland. Toward the end of the film she was six months pregnant but thanks to Russell’s small frame and the bulky costumes, it is impossible to notice. 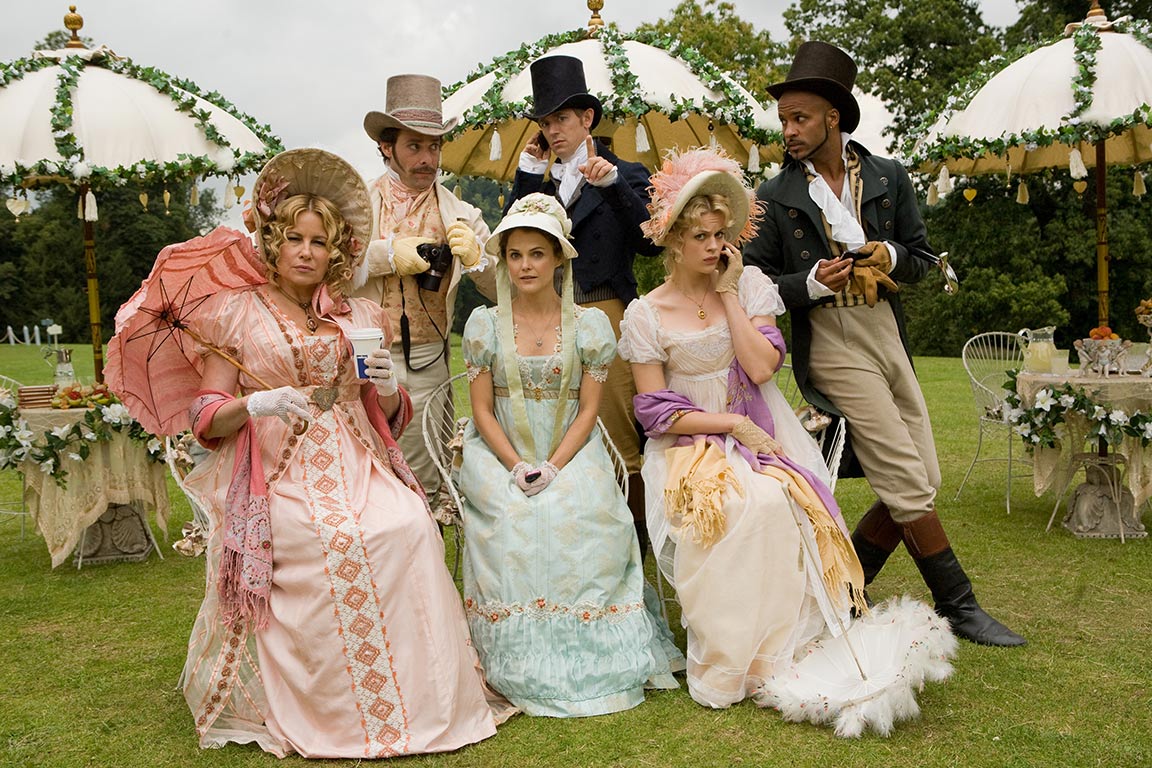 There are people who are obsessive when it comes to Jane Austen, and the trailer for Austenland shows us a group of people who are so dedicated to the world of Elizabeth Bennet and Mr. Darcy that they actually go to a place called Austenland. It’s like Disneyland for the other characters, but not Jane Hayes, played by Keri Russell because she is a bit out of touch with reality and wishes her life was an Austen novel.

Since Jane has to deal with modern peers on an everyday basis, most of who do not understand her love for all things Austen, she desires to spend all of her money on a resort to live the life of the other Jane. The premise is cute, especially now that Jane Austen has gained even more popularity in recent years with the BBC version of Pride and Prejudice and the theatrical feature film starring Keira Knightley. Keri Russell is adorable as usual as the lead who is a bit nutty but will surely find the love she is searching for because she is in a place where every man dresses and acts like Mr. Darcy.

Russell always shines when she is slightly unhinged as she was in Felicity and in the film Waitress. Her odd but unassuming character paired with the always ridiculous and over-the-top Jennifer Coolidge is a good match. The trailer for Austenland is charming for sure but also terribly forgettable.