Feature trailer for American Ultra shows a compilation of footage not recently shown in the red band trailer.

A stoner and his girlfriend's sleepy, small-town existence is disrupted when his past comes back to haunt him in the form of a government operation set to wipe him out.

American Ultra marks a reunion for Kristen Stewart and Jesse Eisenberg, who also starred in Adventureland together. In both films, Eisenberg's character had a fixation in marijuana.

To get into practice for playing a stoner, Eisneberg went to live with his cousin, who taught him how stoners walk, talk, and act day to day. Eisneberg said he wouldn't be able to carry out the role without his help.

Author Stephen King said on Twitter that he loved this movie, calling it "Fresh and exciting. Very cool."
Uma Thurman was cast but her deal couldn't be finalized, so Sharon Stone was cast instead. When she dropped out, Connie Britton stepped in. 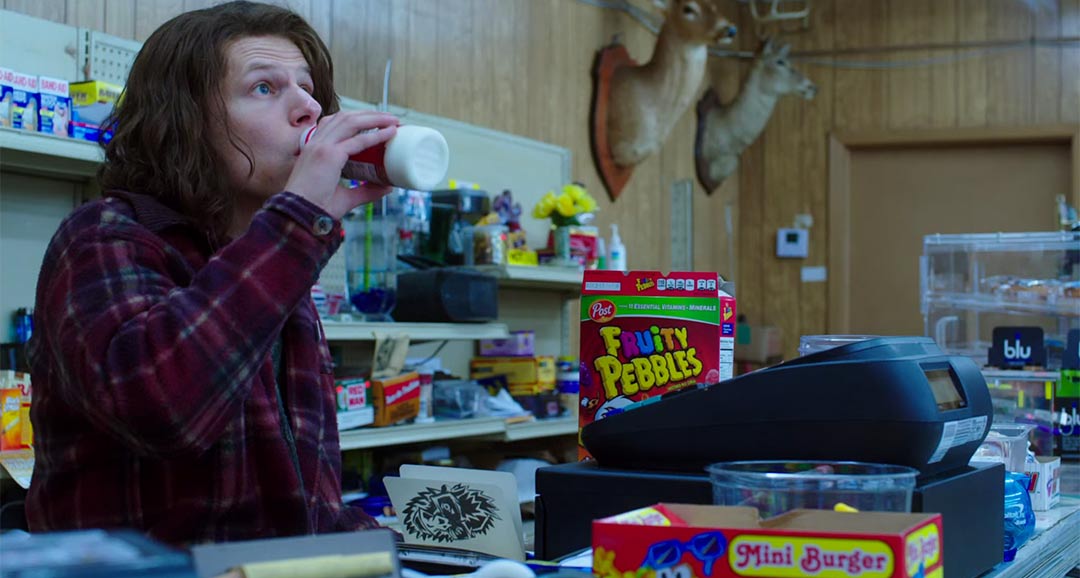 Jesse Eisenberg is usually a fairly good actor, and I like his comedy work, so I was looking forward to seeing how he'd fare as a stoner who is unwittingly part of a government "Ultra" program, meaning he is trained to kill without even knowing it.

Unfortunately, the answer is, not too well. Eisenberg's character is stuck somewhere between being an all out stoner or someone who's just a bit lazy, and it doesn't work. For his character to work here, he needed to go for it completely and he doesn't.

As his girlfriend, Kristen Stewart doesn't fare too well either. Again, I was looking forward to seeing her being someone other than the perpetually moody and depressed Bella Swan from Twilight but lo and behold, she's Bella Swan all over again, only this time with red hair.

I feel like American Ultra is a movie that could have worked, with a different director and cast. The script and plot isn't all that bad, but it's execution just isn't strong enough. This movie absolutely tanked at the box office and you have to ask why. Is it just the simple fact that Eisenberg and Stewart aren't big enough names to pull audiences in, or is it that the trailers haven't enticed us to see this movie? Given that this trailer comes off as rather dull, I'd say it's a combination of both; you can make good trailers of bad movies well enough, but American Ultra just doesn't appeal.