A fictional film set in the alluring world of one of the most stunning scandals to rock the States, American Hustle tells the story of brilliant con man Irving Rosenfeld (Christian Bale), who along with his equally cunning and seductive British partner Sydney Prosser (Amy Adams) is forced to work for a wild FBI agent Richie DiMaso (Bradley Cooper). DiMaso pushes them into a world of Jersey powerbrokers and mafia that’s as dangerous as it is enchanting. Jeremy Renner is Carmine Polito, the passionate, volatile, New Jersey political operator caught between the con-artists and Feds. Irving’s unpredictable wife Rosalyn (Jennifer Lawrence) could be the one to pull the thread that brings the entire world crashing down.

According to Christian Bale, much of American Hustle's dialogue is improvised. When Bale worried how this would affect the plot, director David O. Russell said that he hates plots, and he's all about the characters.

It was Bradley Cooper's idea to give his character a perm, as well as having the scene with him wearing hair curlers.

American Hustle is tied with Gangs of New York and True Grit for the second highest number of Academy Award nominations without a single win. All were nominated ten times. 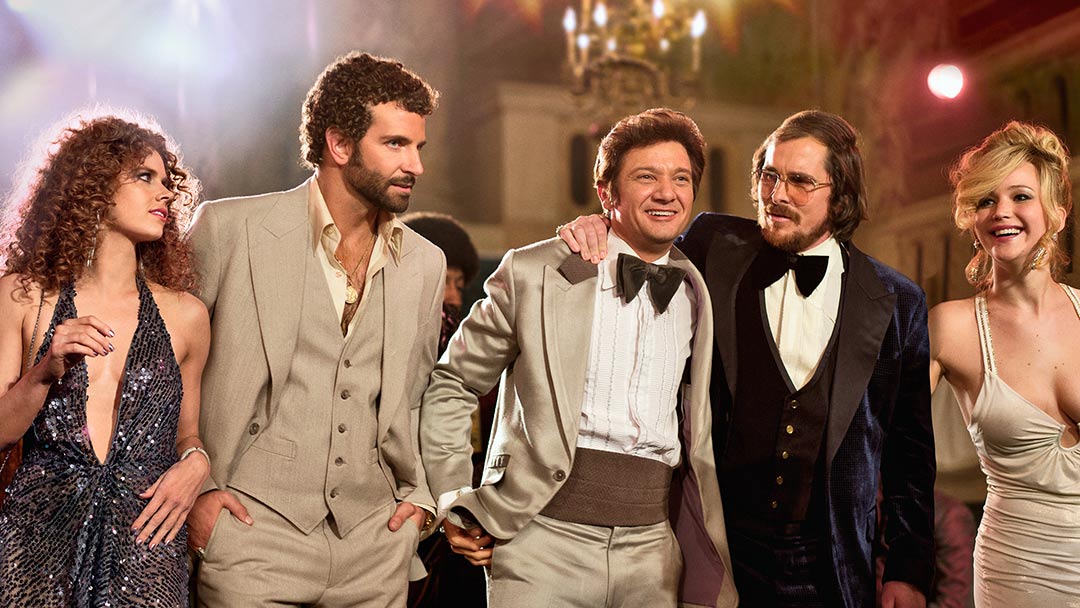 David O. Russell has already worked with Bradley Cooper and Jennifer Lawrence for the highly acclaimed Silver Linings Playbook. There, both actors had a real chance to showcase their talents as great character actors, and it seems that Russell has once again capitalized on their talents.

American Hustle follows con-man Irving Rosenfeld (Christian Bale) and his partner Sydney Prosser (Amy Adams) who are forced to work for crooked FBI Agent Richie Di Maso, who pushes them into the world of the Jersey mafia and into situations beyond their control.

Though the movie is described as a crime drama, there is plenty of humor present in this trailer. A lot of that will be down to Russell's writing, which always contains a lot of amusing moments, but it's all executed well by the actors which is why this trailer works so well.

From Amy Adams' droll delivery describing Christian Bale's physical appearance, to Bradley Cooper's serious conversation while sitting with curlers in his hair, American Hustle has that dark humor that I really enjoy. It also, from the looks of the trailer, seems to have plenty of action too.

The cast list is full of gifted actors but one thing I noticed from the trailer is how great Jeremy Renner appears to be. He's an actor I've not really rated before but now I find myself intrigued and wanting to see more of his character. All in all, this trailer makes American Hustle look like one to watch.